As each day passes us by, we often wonder what we’ve accomplished from day to day. Many of us are simply trying to stay above water. Keep all the pieces in place–whether it’s that demanding job with ridiculous deadlines or food on the table and kids delivered to soccer games. Those of us who are also writers, worry about the words we’ve put on paper. Have we accomplished any more than an outline? How can we squeeze in our writing goals among the many demands facing us from day to day?

If we don’t get those goals squeezed in, we will face another dawn of a new year and wonder why…

Let’s not let that happen when 2018 dawns (right around the corner, I might add). When my niece told me she wanted to go to nursing school, she said, “But, it will take me so long. I’ll be thirty by the time I’m finished.” My response to her, “You’ll be thirty anyway. You may as well be thirty and a nurse than thirty without realizing your dream.”

Sometimes, we become discouraged because we have such a long road ahead. As a novel writer, I know all about long roads. If I wrote short stories, that would be different. 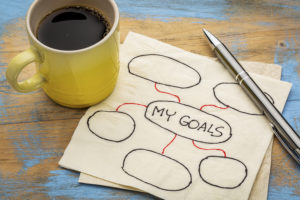 There you have it. Now, that I’ve written them down, I have no excuses.