Today we are excited to have M. Jonathan Lee with us. He’s written two fascinating novels, The Radio and, his recent release, The Page. Not only can you read how Jonathan brought his personal experiences into the writing but also you have a chance to win signed copies of his books. Visit, comment, join Jonathan on social sites and increase your chances to win! 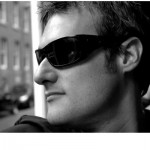 A personal essay by M. Jonathan Lee–How I Bring My Personal Experiences into My Writing

“Writing for me is a very strange experience. I feel to some extent that I am constantly writing even when I am nowhere near my laptop! I seem to write in my head whilst driving, shopping or daydreaming. I seem to take in signs outside shops, conversations I overhear or things I read and turn them into some paragraph or other in my head. Obviously I don’t use all of them and some are quickly discarded.

I have written two novels to date and the third is well underway. My first, The Radio touched upon the very difficult subject of suicide and although is written as a black comedy, does bring to the fore the feelings the lead character has in dealing with the tragedy. It also brings into stark reality the feelings as I understand them that his deceased son had up until his death. The Radio was largely a cathartic novel, sadly I have had to live through such a depression that gripped and ultimately took my brother, Simon. Many of the experiences within The Radio are almost exactly what I remember I experienced.

The Page, a thriller, and the second in the loosely titled ‘The The’ trilogy, was slightly different, but also based on some fact. In The Page, the lead character is on holiday for the first time since a tragic car accident that took his wife. Whilst by the pool, a gust of wind strips pages from a book across the pool and one single page sticks to his chest. He peels it off and reads it, shocked that it tells the exact story of the events leading up to the crash, right down to naming him and his wife. The story then develops into a race against time whereby the lead character tries to find the rest of the book before his dark secret is discovered.

This event may seem slightly far-fetched but it actually happened to me in Las Vegas about six years ago. A whole book was stripped by the wind and a page did actually stick to me! In that case though it was from a romantic novel, at that time bore no resemblance to my life and to be fair I’m fairly dull so don’t have any dark secrets.

Therefore, I would have to say that almost every second of every day is spent formulating ideas, developing something I’ve observed and molding it into something usable.” 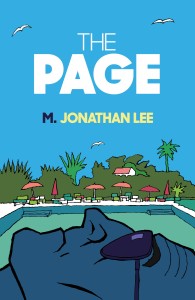 Excerpt from The Page

The woman had been trying, as the man had requested, to ‘book an appointment’ with him for a number of weeks. He was busy at work. He didn’t have time for a drink. She had waited patiently, rebuffed over and over but tenaciously persevering like a summer wasp. Each time she was refused his time, she would return with unrelenting persistence. She would get her moment. She would have her say. The man believed he knew what the woman had to say and internally conceded he would allow her ‘her’ moment. Just not yet. First, he needed time.

One evening a number of weeks earlier, he had finally relented and suggested they go to a country pub to have the conversation the woman so desperately wanted. She was unsure why he had picked this particular pub over any of their usual, more local choices. However, due to the nature of what she had to say and the fact that they were likely to bump into friends or perhaps clients, she felt that on this occasion she could allow this.

They shared the usual small talk on the ten-mile journey, each knowing that they would speak about something much larger when they arrived. At the pub the man ordered his usual whisky and water, the woman her small Chardonnay. The pub was long and thin, with the exterior stone visible in places. The cream walls were lit with mock-Victorian gaslights which housed amber-coloured light bulbs that jumped and crackled in a predefined pattern. The man directed her to a small, quiet corner which he had selected on his previous solitary visit. He hadn’t noticed the light bulbs that day, as it had been a busy lunchtime with bright sunshine streaming through the chipped white window frames.

The woman had considered ordering a large glass of wine but decided against it as she wanted to be completely clear when she said what she had to say. She had rehearsed the conversation over and over in her head for as long as she could remember. It had forced her awake on too many nights over so many years whilst he lay asleep beside her. She was therefore somewhat startled when the man spoke first, scattering her rigidly prepared conversation structure like dominoes.

“I know why we’re here, Margaret,” he said in a headmaster-like tone.

“You do?” she replied, already struggling to remain steadfast.

“Yes, I do, Margaret,” he replied, repeating her name for gravitas.

She immediately knew that she had lost control of the situation. She was used to this tone, that unwavering, quietly spoken ‘you are nothing without me’ tone. It was one of many other characteristics she had got used to during their thirty or so years of marriage: his condescending looks, his controlling nature, his ability to make her feel like she physically shrunk when he spoke to her. She couldn’t remember whether it had always been like this. The feeling of well, just drowning. Being caught in a funnel of rapidly reducing sand, spinning helplessly toward the narrow chute at the bottom. The life being sucked from you. A feeling of pure misery. Pure misery. No, she concluded, she couldn’t remember any other feeling as far as the man was concerned. But more recently she had begun to feel alive. It was a physical feeling, as if something inside her had burst and sent shockwaves from the centre of her body to her furthest extremities. To her fingers. Her toes. Her own mortality and her own happiness were now paramount. She could not continue to live this way. These thoughts flooded into her mind and mentally she returned to her script. She would not be overpowered. Not this time.

“Well,” she said, “then you’ll know I’ve been unhappy for some time.”

His eyes narrowed. “Margaret, if I could just stop you there…”

Margaret shuffled slightly in her seat. “I can’t tell you exactly how long, Michael,” she conceded, “but a long time.”

“That isn’t very helpful, Margaret, now is it?”

She willed herself to be strong. “Well, I’m not sure that the exact length of time is important…”

The conversation continued, Margaret asserting herself in bursts as she tried to make her points and state her feelings to her husband. Each time it ended in the same way, a feeling of defeat. A feeling of being utterly overpowered by a carefully chosen, small technicality. Michael was not going to make this easy. But Margaret was not going to stop.

Enter to Win a signed copy of Mr. Lee’s books

Jonathan Lee was born in a small mining town somewhere in the north of England. His first novel, The Radio, was nationally shortlisted in The Novel Prize 2012 for new authors, coming second from over 4,000 entries. The Radio was published in April 2013 and has received critical acclaim and sold more than 5,000 copies. His second novel, The Page was released in January 2015.

The Page has 15 clues which to a lesser or greater extent give away the twist in the final chapter. The clues are inserted into the text and hopefully are well-hidden. To celebrate the release of The Page in February 2015, a competition will be run. We will invite people to identify the clues and enter (when they have ten or more – as some may be so well hidden they are never found) through my website  www.jonathanleeauthor.com. The competition will close 163 days after the release of The Page, and the winner (i.e. the one who identified the most clues – in the event of a tie – at random) will win:

1) One month’s royalties earned from The Page;

2) The original manuscript (of which there is only one);

3) A numbered and signed copy of The Page – review copy – there are only 20 of these worldwide;

4) A signed copy of my back catalogue in paperback or kindle version;

6) A free signed copy of all future novels released by me for life.

Join me in thanking M. Jonathan Lee for visiting our blog today. You can find his books on Amazon and connect with him on Facebook and Twitter @j0n4th4n_lee or you can visit his website: www.jonathanleeauthor.com

Don’t forget to enter during the tour and visit all the other stops!