Three years ago my husband and I traveled to North Carolina to see family for Christmas. My mother and stepfather live there and my husband’s son as well as his brother. It was one of our typical whirlwind trips–2 nights here, one night there, trying to cover all the bases.

My youngest sister lived in Savannah with her husband. One of her daughters lives near my parents in North Carolina. So, when we arrived at my mom’s, we got to see my sister and her husband and children. It was a fairly typical Christmas celebration. We sat around before dinner, talking and sharing old stories. My sister’s husband had been laid off from work but she was planning to rejuvenate her painting. She had been commissioned to paint a couple of murals–one was an office mural another was for scenes in a baby’s room. She’d put together a portfolio of her work that she was passing around.

Over the years, my sister and I had drifted apart for one reason or another. We had been very close as children, but teenage angst found us fighting over the merest things. Later, we went to college in different places, married and lived far from one another. Our lives separated. Nonetheless, whenever she needed my help for anything, I always came through. We were apart physically and somewhat mentally, but we were still close. On this occasion as I gazed at her portfolio of which she was so proud, I said a few nice things, but not enough. I pointed out the illustrations I really liked and tried to offer words that would give her confidence, but my heart was not in it. I was thinking about the next stop on our family trip. My sister thanked me for my encouragement, but I wonder if she saw the distraction in my eyes. 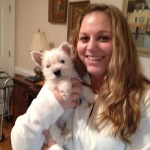 My sister’s daughter and puppy taken that Christmas

Later that evening she told me that her puppy was in their car. She raised Westies and this was the latest little one. I asked to see it. We walked out to her car, me following her, the two of us giggling like we did as kids. The puppy was precious and we brought him in the house for everyone to cuddle.

The next morning before we took off for our next stop, my sister came by to say “good-bye.” I had just gotten my new iPhone. I was showing her and her daughter how Siri worked. In that instance, Siri said, “I’m so sorry, but I can’t help you with that.” We all broke out laughing. It felt good to laugh together. We hugged good-bye and we made our way to my husband’s brother’s house.

That was the last time I saw my sister. One week later she fell ill from a severe and deadly asthma attack. The lack of oxygen to her brain left her in a coma from which she never awoke. She died at the end of January. 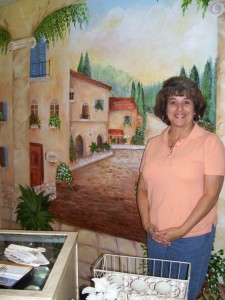 Dottie at the mural she painted.

When I think back on that Christmas, there are several things I remember:

Her art work. I wish I had known that was the last time she’d pick up a paint brush

Hugging her, feeling her close to me. I desperately wish I could hug her just one more time

This Christmas, as you visit your family and as you go from place to place and the hustle and bustle of Christmas overwhelms you, think about how fortunate you are to be with those people you love.

And, give them one more hug.