0
0
0
0
0
After I read A Man Called Ove, I decided to find another book by Fredrik Backman @Backmanland #mybookreview

Reading the reviews of his latest works, I selected Britt-Marie Was Here with trepidation. Some of the reviewers complained that it didn’t match Ove; Others liked it even more. Being a savvy buyer, I decided to take the risk and I’m glad I did.

He puts you in the mind of his quirky characters, and he doesn’t leave. You might think of one response in your head, but he character does or says something entirely different. And what he or she says and does makes you laugh out loud because it is so genuine. 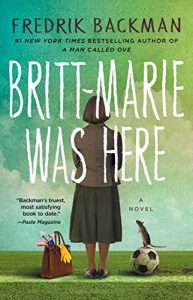 This is a story about a very lonely, lost woman @Backmanland#mybookreview

She spent the majority of her life living for her husband, washing his shirts, fixing his meals, cleaning his house, raising his (not hers) children. I was reminded of a robot, something without feelings or emotions that carried out the duties of life without complaint. Until the day of her husband’s betrayal. On that day, she walks out without a word, and her life begins for the first time. She’s sixty-three years old and about the bravest person you’ll ever meet.

Britt-Marie ends up in a very sad, depressed community. She brings something new and fresh into that community without really meaning to. Everyone touches her and she them. Changes start. Slowly and gradually. Not to give too much away, I’ll just say that she finds that life can be fulfilling and her final decision to finally live, captures our hearts. As a reader, I felt satisfied at the end. At the end of Ove, I felt sad. Nonetheless, both ended as they should have, as Britt-Marie would want it to end and as Ove might have predicted.

Here are some examples of the talent of Fredrik Backman. And, by the way, he says he loves getting feedback from readers, even negative feedback. I can only say in the negative light, that some parts dragged a bit longer than I would have liked, but after all, he was dealing with Britt-Marie and years to overcome. It had to be realistic.

The man smiles jeeringly at the men in the corner, and they look back at him as if hoping that by doing so they’ll eventually set him on fire.

She looks at him as if she just bought a new bag and he vomited in it.

She has never met a gangster with a correctly organized cutlery drawer.

Sami gives a deep breath, which is not at all a sigh.

Sven’s neck doesn’t seem capable of holding up all his thoughts any longer.

These are just examples of the amazing writing you’ll encounter in this remarkable book. Enjoy it!

For those of you who like to read print books, my latest releases, e-Murderer and Murder on Moonshine Hill are now in paper! Get your copy today at all online outlets.