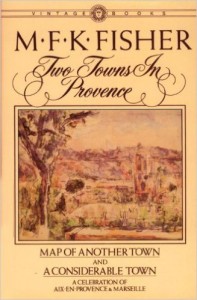 I recently finished MFK Fisher’s Two Towns in Provence. The book was written in the early 1970’s and shares Fisher’s experience in Aix and Marseilles France during several visits in the 1930’s, 1950’s and the 1970’s. My guess is little has changed in those towns since then. Fisher is a beautiful writer. Even though this book is mainly a travel memoir, it paints a wonderful picture of life in those Southern French towns from the point of view of a lone American woman with her two little girls.

She begins in Aix, the city of fountains. Her descriptions captivated me. I could almost hear the trickle of water throughout the town. I could imagine the narrow cobble-stone streets with French men and women scurrying along, carrying a loaf of fresh bread under their arms. The shops and restaurants came alive with Fisher’s details. When she was there in the 1950’s while her children were quite small, France was still reeling from the the war. Everyone Fisher described, whether a waiter, an innkeeper, a shopkeeper, a homeless man on the street suffered during that time. They all had different stories. Aix is a city I’d love to visit and her descriptions made me even more anxious to do so.

Marseilles, on the other hand, is not a city high on my list to visit. Fisher seems to have had a love/hate relationship with that city. She points out the beautiful spots as well as the ugly places. Being a large port, Marseilles attracts the lowest of low. She does not brush lightly on those people and their effects on the city. But, her love for Marseilles rings out loud and clear.

To me the book was long for a travel memoir #bookreview

What could she possibly say in over four-hundred pages. I expected it to be over in a couple of hundred. But, she kept going and so did I. It’s not a fast read but it is a beautiful read.

It reminded me of a journey by ship. Slow and methodical #bookreview

Here are a few of the beautiful excerpts I particularly liked:

“The most beautiful thing we can experience is the mysterious…the source of all true art and science. He to whom the emotion is a stranger, who can no longer pause to wonder and stand rapt in awe, is as good as dead; his eyes are closed. To know that what is impenetrable to us really exists…this knowledge, this feeling is the center of true.

“We are subtly catatonic, each in our own way, perhaps a little drunk on white wine and regret…”

“At night it glows, as do many great modern fountains, with white and colored lights which turn it into a kind of glorified wedding cake, audible if inedible.”

“The sunlight poured in through the beautiful windows, and stripped Madam’s face like a scalpel, seeing viciously into the essence of her, the skin within the skin.”

As I read Fisher’s accounts, I wondered about her life #bookreview

Why were there no men with her? She had two little girls but no fathers. She travelled with her sister at times and talked about her. Later, I read about her life. Her oldest daughter Anne’s father was never acknowledged. By the time she was born, Mary had been married twice, divorced and widowed. After divorcing her first husband, she married Dillwyn Parrish. That was a good marriage until he developed Buerger’s disease–a very painful circulatory illness that caused him enormous pain. He shot himself. Later, Mary met Donald Friede with whom she fell in love and married. That’s when her second daughter, Kennedy, was born. But, that marriage, too, didn’t last.

In other words, Mary was a single mom who travelled to France, lived there for long periods with her children, and wrote beautiful books. Men came and went in her life, but she was an example of an independent, successful woman.

In Two Towns in Provence, you’ll learn about the people, the art, the churches, the doctors, the festivals, the shops, the food, and so much more.

If you liked this review, read my others on my blog. I usually review many of the books I read.