As many of you know, I’ve been talking about my new mystery/suspense novel for months. Many of you have wanted to read it and have asked about doing so. Today is the day! Launch day means the book is now available at all online book sellers, including Amazon, Barnes & Noble, iTunes, KoboBooks. For me it’s the end of a very long journey.

I decided to give it a go. Working away, creating, sitting at my computer screen, dreaming up events and characters, I created a 500 page tome that I’m sure no one would ever want to read. I went back to that tome a time or two and did some editing, but it didn’t take long to realize that my first attempt was nothing more than practice.

I began again. This time my goal changed from simply writing a novel to writing a novel worth publishing. That meant I had a lot of learning to do. I spent many years going to classes about the craft of writing. At that time The Clock Strikes Midnight was born. My second attempt at writing a novel proved successful. Nonetheless it took a long time to gain the attention from the publishing world. I will never suggest that the journey was easy. Sometimes I get frustrated with young authors who hit the big time quickly and act as if it was an easy road. They lucked out with timing and connections. I had to work at it. I would venture to say that my road was more normal.

When MuseItUp Publishing sent me an acceptance letter, I could hardly believe what I was reading #museitup #booklaunch

. I almost deleted it!! Imagine that! I read it twice amazed. This book, my second fiction attempt (although by now I have two other manuscripts in the bag), had finally found a home. In fact the letter from the publisher began, Welcome Home. Perfect.

So now you have the long story. I hope you will enjoy the book. It’s not always an easy read. It’s a read that will make you think as you are drawn into the lives of the characters. You will be satisfied in the end. Things happen and you will learn why. That’s important to me as a reader. Enjoy the book. Have fun. And thank you to all of you who took the risk to order a book from a new author and to read it. 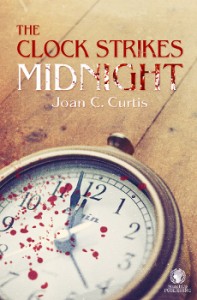 Here’s the blurb for the book to whet your appetite. There’s much more about it on this website. But, if you’re like me, buy the sample and if you feel drawn in, buy the book.

Janie returns to her childhood home to elicit help from her sister. She faces more than she bargained for when she discovers her sister’s life in shambles. Meanwhile her mother’s convicted killer, her stepfather, recently released from prison, blackmails the sisters and plots to extract millions from the state in retribution. New revelations challenge Janie’s resolve, but she refuses to allow either time or her enemies to her stop her from uncovering the truth she’s held captive for over 20 years.

It feels as if a book was born today. The Clock Strikes Midnight’s Birthday #booklaunch