We are hosting Benjamin Dehaven on his virtual blog tour organized by Goddess Fish Touring Company. Benjamin will also be giving away a $50 gift card in a random drawing. So, visit as many tour stops as you can, register to win and comment! See the banner below for tour stops and the rafflecopter. 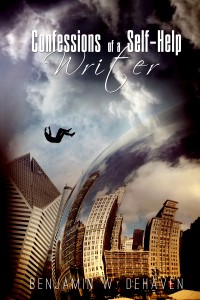 Confessions of a Self-Help Writer

A ghost, a philanthropist, a con man, a devout Catholic, a gigolo, a savior, an heir, a common man, and an addict are just some of the words used to describe Michael Enzo, who some sources credit with ghost-writing more than 108 self-help books on behalf of celebrities, politicians and business leaders. After failing to make what he considered to be a positive impact on society he began to destroy those closest to him including Benjamin DeHaven, the author of this book, and former collaborator. Defrauding an industry for almost 20 years by exploiting people’s insecurities and profiting from them, more than likely these friends contributed more to the field of self-help, while profiting from it, than they will ever know.

Believing they could only understand people’s problems by suffering along with them, they lived on the razor’s edge. If you’ve ever picked up a tell-all biography of a celebrity or a title from the self-help section at the bookstore, certainly you would question the source.This is an inside look at the mind of Michael Enzo and it is the author’s hope that people will start helping themselves again after reading it. Discover what turns someone from preaching salvation towards seeking its destruction. You won’t believe this could be true.

Writing is life in many cases for me. Without the escape of a good story, balance in everyday life would be almost impossible, or there would be a very rich psychiatrist from listening to what bursts from my head. Sometimes it seems difficult to find time, or get in the mood to write. Sometimes I will go weeks without writing something, and then disappear for a month, only to return in a better mood. So I might venture to say I am terrible at balancing the two-I am an all or nothing kind of person. When I was engaged I did most of my writing in the middle of the night or early mornings but now that I am single and time seems limitless, I am completely out of balance.

All about Benjamin DeHaven

Benjamin W. DeHaven was born on a pool table after a Waylon Jennings’ concert in 1977. His personal success is outweighed only by his stunning good looks and adherence to unwritten moral guidelines. He has been described as a thinking man’s Tucker Max as well as an idiot’s Hunter S. Thompson. His goal is to die from an unwavering commitment to be more like He and Michael Enzo were friends.

Want to learn more about Benjamin?

Benjamin will be awarding a $50 Amazon/B&N gift card to a randomly drawn winner via rafflecopter during the tour.  He will also be giving away 5 signed hard copies of the book. Don’t miss out! Visit Benjamin on as many stops as you can and comment on the posts. You may be the winner!  a Rafflecopter giveaway

Join Benjamin on his tour!

Click on the icon to find out where he’ll be through November 24.

OR Take a look at the stops following this one.

October 24: Straight from the Library