0
0
0
0
0
When I begin a new book, I often stumble over the character’s names #writingtips 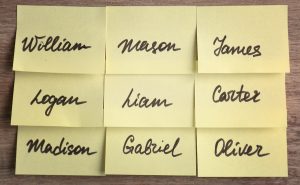 when you know little about them. Even writing a character bio requires my giving the person a name. And, that name then becomes part of the individual I’ve created. The name tends to take on characteristics and traits that are then associated with the character.

We all carry stereotypical ideas that we associate with names #writingtips

Have you ever met someone and thought, he or she doesn’t look like a David or a Cathy? They look more like a Paul or a Carla. The way we associate names come from our experiences. If you knew a David growing up or at the university, you then associate that name with the person. It happens subconsciously. Most of us don’t think about this or even worry about it. But, if you’re a writer, you do.

I’ve often have had to change a character’s name for one reason or another. Never a protagonist or antagonist, but often a secondary character. I find doing that very hard. I’ve grown accustomed to the old name and the new name just doesn’t seem to fit. Have you experienced the same issue with changing a character’s name?

Why did I change a character’s name, you might ask? There are several reasons 1) The original name may not fit the generation. Believe it or not there are generational names. I doubt there was ever a Misty in the 19th Century. 2) The name might sound too much like another character and could confuse the reader. This is a common problem. I sometimes like names with a nice literation. I’ll have a Louise, Louis, Lenny, and Laura. Good grief! The poor reader would have a horrid time trying to keep up with all those similar sounding names. 3) The name may reflect a racial stereotype that may be totally inappropriate for the work in progress. As an example, naming an African American character Lucretia or Darius. I did name my Italian character Rosaria, but since she was a full-blooded Sicilian, I felt comfortable doing that.

As a reader, you might not realize how much energy writers expend in naming their characters. If we develop a series character and recurring people for that series, the names are extremely important. We, as writers must feel comfortable with the names. One interesting tidbit. I named the two cats in my Jenna Scali mysteries, Stalin and Churchill. One cat is black and the other white. I had a reader suggest I shouldn’t have named my black cat after a deadly dictator. Perhaps, I shouldn’t have done so, but now I’m attached to the name. Changing it just isn’t an option! Furthermore, I believe Jenna might object.

So, what are your experiences with naming and changing the names of your characters? #writingtips