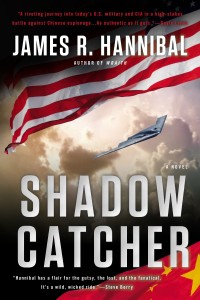 From James R. Hannibal—a veteran combat pilot with Top Secret clearance from the U.S. government—comes an electrifying high-tech thriller in the great tradition of Tom Clancy…

Over ten years ago, Air Force major Nick Baron was part of a failed special ops mission that left a B-2 stealth bomber at the bottom of the Persian Gulf. Now, leading his men—the Triple Seven Chase team—Baron must find the bomber and dispose of it for good before any unfriendly nation can steal the onboard technology for its own purposes. But as the team embarks on its mission, there are greater dangers waiting.

When the CIA intercepts a call signal from an operative in China long thought dead, the Triple Seven Chase team is given the perilous task of retrieving the lone soldier from deep within the Chinese wilderness. There is only one plane for such a dangerous mission: the Shadow Catcher, a plane with capabilities beyond anything that has ever flown.

What Baron and his men don’t know is that the enemy is already among them—and that the Shadow Catcher itself may be the ultimate prize.

A lone Westerner weaved his way along the crowded sidewalk in front of the Souk Sharq in Kuwait City, suffering the uneasy glances and occasional loathing glares of the locals. They did not bother him; with his flaxen hair and fair skin, such looks were unavoidable. On another day, he might have indulged his audience by slowing to gaze up at the beautiful souk, playing the part of the wandering tourist, admiring the high towers and ornate arches that hearkened back to the glory days of the Persian Empire. But not today. There was no time.

For ten years, the objective had lain hidden, dormant. For ten years, the secret had remained sealed in its watery vault. Now that he was back, he felt like that seal had been broken, as if his mere presence in the Persian Gulf had started a race against an unknown enemy. And somehow he knew he was already behind.

Once inside the souk, Air Force major Nick Baron moved into the shadow of a pillar. Now free from the usual disdainful looks, he let his steel blue eyes slowly drift over the crowd, scanning the potpourri of faces for something much more dangerous: recognition. He found none. Finally satisfied that he was not being watched or followed, he turned his attention to finding his teammate. It did not take long.

Major Drake Merigold stood in the center of the Grand Corridor at the base of a beautiful two-story water clock, staring up at the Jules Vernian sculpture with his mouth slightly agape. He wore an orange and blue Hawaiian shirt that hung untucked over his khaki shorts. He could not have stood out more amid the drab garb of the locals if he had worn a fluffy red wig and big floppy shoes.

The two field operatives of the Triple Seven Chase squadron had arrived on separate flights, on separate carriers, under assumed names. Each had used a unique, indirect route to reach the souk, where they were supposed to quietly join up before heading out into the gulf to meet the rest of the team. The stakes of this mission demanded strict adherence to the principles of covert movement. But then how could Drake be expected to fully grasp the stakes? No one had told him the real reason they were here.

“Magnum PI called,” said Nick, joining his comrade at the water clock. “He wants his shirt back.”

Drake nodded, still looking up. “It’s called hiding in plain sight, boss.” He was nearly a head taller than Nick, with broad shoulders to match and chiseled Greek features. With his flawless dark hair and obnoxious shirt, he looked like a movie star about to go on a cruise rather than a military operative. He glanced around the wide corridor, pulling the loud shirt away from his body and fanning it to take advantage of the air-conditioning. “They did a good job rebuilding. The last time we were here, an Iraqi missile had just crashed through the ceiling. You’d never know that there was once a huge crater right where we’re standing.”

For the first time since Nick had stepped out of the shadows, Drake looked him straight in the eyes. “So, why are we back?”

Nick dropped his eyes from Drake’s to check his watch. “The others should be reaching the rendezvous point soon. It’s time we got out there.”

Drake frowned. “You’re starting to act like the colonel.”

“Just pick up your bag and let’s go.”

Nick shifted the strap of the duffel bag that hung over his shoulder and started walking toward the central rear archway, the exit to the marina. Like Drake, he wore civilian clothes to hide his military affiliation, although his choices were a little more understated. His dark gray button-down shirt hung loose on his shoulders, masking the solid build beneath. Both men carried civilian duffel bags with enough gear to get them through a few days on the water, just as Colonel Walker had directed.

Warm salty air rushed over him as Nick pushed open the glass double doors. He started down the stairs to the wooden boardwalk, where several docks extended out into the gulf. Each had room for twenty small craft and each was nearly full, a forest of masts and canvas. Other than the whip and snap of the sails in the gentle breeze, all seemed quiet. Nick felt the temptation to relax.

The doors to the Grand Corridor clicked closed behind him, wrenching his senses away from the pleasant atmosphere. He paused halfway down the stairs. Scanning farther down the docks, he spied a pair of locals in the common white thaubs and keffiyehs. He watched them for a few moments as they prepared to launch a blue and white runabout, probably for an evening pleasure cruise. They looked harmless.

At the end of the third dock, he found a black dinghy waiting at the prescribed slip. He held it fast and tossed in their bags while Drake jumped on board and prepped the motor.

Within minutes, Drake had the throttle fully open, accelerating out into the open waters of the Persian Gulf. Every so often, he steered into a wave, sending white spray over the bow and onto Nick.

“I know you’re doing that on purpose,” said Nick, wiping the oily gulf water from his face.

“I’ll relax when the mission is complete and the team is safely back at Romeo Seven.”

“You know that ain’t true.”

Nick refused to respond. He was in no mood for friendly ribbing, and he feared that in a few hours’ time, Drake’s usual jovial temper would sour as well. Before the day was over, Drake would accuse him of betrayal, and he would have every right to.

Twenty minutes later, another craft appeared on the horizon. Despite his fears, Nick managed a thin smile. The commander of the Triple Seven Chase was well known in the covert ops community as an acquisitions wizard. Colonel Richard T. Walker had just pulled another rabbit out of his pointy hat, and this time she was a big one.

Nick estimated the vessel to be at least 250 feet long with a 50-foot beam. She looked fresh from the dry dock, with unblemished white paint and a thick red stripe along the rails. She was well equipped too, with three golf-ball-style radomes amidships and a docking station jutting out from the rear beneath two heavy salvage cranes.

“Illustro ex Caliga,” read Nick, squinting at the black lettering near the bow of the craft.

“Good call.” Drake scratched his chin in thought. “If I remember my Latin correctly, it means ‘Illumination out of Darkness.’” He guided the dinghy to the aft station, cutting his speed to a crawl and then inching into position in an agonizingly slow attempt at docking.

“Well, that was ugly, Merigold,” said a booming voice from above. An imposing figure leaned against the rail of the upper deck. With his gray crew cut and perpetual scowl, Colonel Walker carried the aura of a man in full US Army service dress, even when wearing a golf shirt and khakis.

“Hey, I fly airplanes, not boats,” retorted Drake, slapping the tubular black hull of the dinghy. “I’m used to touching down on a solid surface at a hundred and fifty knots, not wallowing in to a moving target at five. You should be glad I didn’t ram this thing into your little rental here.”

Walker ignored Drake’s attempt to bait him. “Hurry up, gentlemen,” he said. “We have a lot of work to do before dark.”

“And what work is that, sir?” asked Drake, hopping onto the ship’s dock to secure the dinghy.

James will be awarding a $20 Amazon or B/N GC to a randomly drawn winner via rafflecopter during the tour. Visit lots stops today!

James R. Hannibal is a former US Air Force Stealth Bomber pilot with over a thousand hours of combat experience including over-watch, close air support, and HVI captures. He graduated from the US Air Force Academy in 1997 with a bachelors of science in Middle Eastern Studies and earned a masters of science from Central Missouri State University in Aviation Safety Sciences. His flying career included the A-10 Warthog, B-2 Stealth Bomber, MQ-1 Predator, T-38 Talon, T-37 Tweet, and the Boeing 737, 757, and 767. When he is not flying or writing thrillers, James occasionally reviews for the New York Journal of Books. 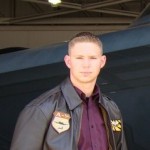 How far will collateral damage from a CIA drone strike reach?

When a suicide bomber shatters the peace of a winter afternoon on the National Mall in Washington, D.C., former pilot and undercover Cerberus operative Nick Baron receives an eerie invitation from the chess app on his phone—a mysterious figure named The Emissary wants to play.

Nick and his covert unit—the Triple Seven Chase team—soon find themselves drawn into battle against an unknown opponent who has resurrected an ancient order of assassins: the legendary Hashashin. And there is a long-awaited prophecy being fulfilled by a series of violent attacks which may culminate in a final apocalypse over Jerusalem.

As the Triple Seven fight to stop each attack, Nick tries to keep The Emissary on the hook by playing their digital chess game. The lines between the game and the fight begin to blur, as every time Nick loses a piece on the board, he loses one of his men. And if Nick cannot find a way to stop the terrorist mastermind, a checkmate may kill millions…

After the towers fall on 9/11, Lieutenant Nick Baron and the rest of the 81st Fighter Squadron are desperate for action. But CENTCOM puts them on the sidelines, leaving the young Warthog pilots restless—and reckless. Then the unthinkable happens. During a high-risk training flight, a rookie wingman slams into the ground.

In the darkness that follows, Nick wonders if he will ever learn to trust a wingman again—or even learn to trust himself. He will soon find out. Despite the black mark on his record, Nick’s application to the elite Stealth Wing is approved. A recruiter for a new covert team has taken note of Nick’s unique combination of skills. Suddenly Nick is swept into Operation Cerberus—a top secret mission that will take him from a harrowing flight over a black testing facility to a fight for his life on the Iraqi Dunes.

“Hannibal brings together a terrific mix of real air technology with intrigue and nonstop action. A true suspenseful story that will keep you turning the pages until the exciting finale; it really is a great tale.”—Clive Cussler

“Get out of the way, Nelson DeMille. Brad Thor—you’ve got competition!”—Raymond Benson