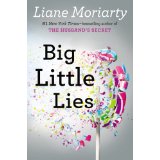 After I read Laine Moriarty’s Husband’s Secret and reviewed it here, I decided to give one of her other books a go.

Big Little Lies is full of tension, conflict and a murder #books #booklovers

The story centers around parents of kids attending a preschool in Australia. It is almost a parody of crazy, obsessed parents. When a single-mom and her son move into the community, they become the targets of abuse from a group of other parents, the Blond Bobs. Moriarty takes the story (and POV) from character to character, focusing on Jane, the single mom, on Madeline, a bitter divorcee as well as the mom of another preschooler, and finally on a beautiful abused spouse, Celeste, the mom of twin preschoolers.

The saga culminates around trivia night at the school #books #booklovers

The author begins at the end, then she backtracks leading up to that fateful night. She prefaces each section with, Six Months before Trivia Night on down until the reader gets to the night. From the very beginning the reader knows someone has been killed. There are snippets from testimony collected by the police cleverly inserted into each chapter. This adds to the suspense. I wondered who might be the luckless one to be murdered. I vacillated from Jane to Celeste and even to Madeline.

From the six-month point to the actual evening of the murder, the reader learns about the three main characters and their sometimes sordid lives. All this helps explain what finally happens.

She handles it skillfully and sensitively.

My only negative response to this book was at times it felt redundant. The reader is told over and over about Celeste’s reluctance to leave her husband and about Jane’s shyness. Madeline was my favorite character. She turned up whenever things got tough.