I’m thrilled to host Clea Simon today on my blog. She has written many wonderful cozy mysteries featuring several series characters but always a cat. Her cat mysteries are quite fun because she treats cats as cats. She doesn’t have cats do super-cat things.

You can read my review here.

Let’s get right on with some questions for Clea and I know you all want to hear about her latest release.

JC:  You are having such a prolific and successful writing career, Clea. When did you first start writing.

Clea: I’ve written for as long as I can remember – in elementary school, I used to make up stories and write them out as little books. But after graduating college, I drifted into journalism, because it seemed like the only career that was really open to me that would involve me writing. My first three books – all nonfiction – grew out of my journalism.

JC: I have a journalism background as well and I noted so does your series character, Theda. Let’s move on to my pressing question since I am such a cat lover. What made you decide to blend mysteries with cats?

Clea: For me, the big decision was to switch from nonfiction to writing mysteries (fiction) at all. I was always a reader of mysteries and I’d befriended the owner of a local mystery bookstore (Kate’s Mysteries) because I was such a regular. Kate Mattes, the owner, used to throw a holiday party that was pretty legendary – dozens of authors signing in the little house that held the shop, so many fans that the crowd would spill out onto the lawn… Well, my third nonfiction book involved cats (The Feline Mystique: On the Mysterious Connection Between Women and Cats, St. Martin’s), and Kate invited me to sign it at the party. I said, “but it’s not a mystery.” She said, “Clea, believe it or not, there’s quite a lot of crossover between women who love cats and mystery readers.” So I came and I signed and we all sold (and bought) lots of books and drank a lot of wine. And at the end of the night, Kate turned to me and said, “You should write a mystery.” And the next day, I started what became Mew is for Murder  (Poisoned Pen Press), my first mystery. My 17th mystery, Kittens Can Kill, comes out in March – and I now have two new series going – so I guess she was right.

JC: And, congratulations to you! And let me add my thanks of Kate. Introduce us to your current feline companions and tell us how they compare to the ones in your books.

Clea: Musetta, my current cat is the model for all the cats in my books, really. Both Theda Krakow and Dulcie Schwartz have tuxedo cats like her. My other heroine, Pru Marlowe, has a tabby named Wallis, but her attitude is pure Musetta. Musetta is a rescue kitty from Animal Rescue League of Boston. She rescued us!

JC: I enjoyed Theda Krakow. Tell us about her as a character.

Clea: Like many “first protagonists,” she’s based on me – I also left a newspaper job to freelance, and I was also a music critic. Theda is at a point in her life that many of us know – single, her friends are her family, and the music world – “clubland” – is where she and her friends gather, united by a shared love of/interest in live music.

JC:  You have a new series character Pru Marlowe. Tell us about her and what made you decide to create a new character.

Clea: I am currently writing two different series. The Dulcie Schwartz series started in 2009 with Shades of Grey (Severn House). Dulcie is a graduate student at Harvard. She is studying Gothic literature – full of ghosts and supernatural events – but she sees herself as quite rational. She is an academic, after all, but one afternoon she is visited by the ghost of her late, great cat, Mr. Grey, who warns her not to enter her apartment. She does anyway, and finds her roommate has been murdered… The most recent of the Dulcie/Mr Grey books is Stages of Grey, which Severn House published in the US in Oct.

The Pru Marlowe pet noirs kicked off in 2011 with Dogs Don’t Lie (Poisoned Pen Press). I call them “pet noir,” because these are me writing dark – Pru is a tough girl, but she’s got an even tougher tabby, Wallis. Pru left her smalltown home for the big city, but after a brief, severe illness she has started being plagued by an annoying sensitivity …. She can hear what animals are thinking. Now, she has retreated back to her Berkshires hometown where she is working as a behaviorist. In this opening book, she finds a man dead and bloody by his distraught rescue dog. And she knows the dog didn’t do it…

JC: Wow! They both sound intriguing. I had wondered what you meant by “pet noir.” Thanks for clarifying that for us.  I, too, am working on a series and I wondered if you could share some of the challenges with developing a series.

Clea: Keeping all the minor characters straight! Also, coming up with plausible reasons for non-police to keep getting involved in crimes. But it’s fun. And  I love writing series because you don’t have to say goodbye to your characters just because you’ve finished a book.

JC: Nor do your readers have to say good-bye! We, readers get very attached to our characters as was illustrated when Arthur Conan Doyle tried to kill off Sherlock Holmes.

Clea: The ability to write is like a muscle. You have to work it – write every day. Write as much as you can. And learn to listen to criticism. Just writing without revising is pointless except as a journal exercise. If you want to get good, you have to listen to readers, to editors, to your colleagues. Write, write, write, revise, revise, revise. And never stop reading.

JC: What wonderful advice! Thank you. Now tell us about Clea. We know you’re an accomplished writer and that you love animals. What else would you like your readers to know.

Clea: I read a huge range of books. I’m a fan of Hilary Mantel and Anthony Trolloppe, and I’m just now finishing up the Jill Lepore book on the history of Wonder Woman. I think if you don’t read, you shouldn’t write. My husband is also a writer, and our house (and life) is filled with books! 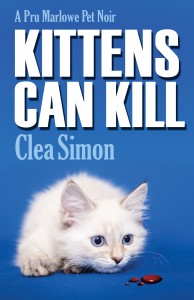 Here’s a blurb from Clea’s newest release that will come out on March 3, 2015. There’s lots of time for you to catch up with the series. KITTENS CAN KILL is the fifth Pru Marlowe pet noir published by Poison Pen.

The dead don’t keep pets. So when animal behaviorist expert Pru Marlowe gets a call about a kitten, she doesn’t expect to find the cuddly creature playing beside the cooling body of prominent Beauville lawyer David Canaday. Heart attack? His three adult daughters angrily blame drug interactions, feline allergies—and each other. And begin to feud over their father, his considerable estate, and that cute ball of fluff. While the cause of death is pending, each sister has an axe to grind—with arguments that escalate when David’s partner reads out the will. Pru’s special sensitivity to animals, which caused her to flee the cacophony of Manhattan for the quiet Berkshires, adds further problems. The local vet is overwhelmed as the animal hospital’s money runs out. There’s a needy Sheltie and some invasive squirrels, too. But the dead man’s kitten, his former partner, and his troublesome family keep drawing “wild-girl” animal psychic Pru back in. Despite the wry observations of her trusty tabby Wallis, now the wrongfully accused kitten’s guardian, and the grudging compliance of her cop lover, this may be one time when Pru can’t solve the mystery or save the kitten she wants to believe is innocent. A single witness knows the truth about that bright spring morning. How far can Pru investigate without risking her own hidden tale?

Follow Clea on Twitter @clea_simon. You can find all her books on Amazon and Barnes & Noble and all the major outlets. Or you can go to her website www.Cleasimon.com. Even better go to her delightful blog: Cats, Crime and Rock & Roll.
0
0
0
0
0