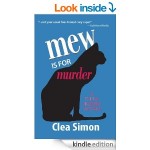 Recently I read a delightful cozy mystery by Clea Simon. The book, Mew is for Murder #mystery #books #cozy

This is the first in the Theda Krakow series. Theda is a freelance journalist. She’s also a cat lover and owner. The story is about Theda’s discovery of the body of a “cat” lady. How did the cat lady die? What will happen to her cats? And, is there really a hidden treasure?

She is also a young woman with man problems. She’s recently broken up with her boyfriend. Living in Cambridge in an old part of the town, she enjoys frequenting the music haunts. There she meets a potential man. She’s attracted to him, but she’s also attracted to a nice looking policeman. These distractions plus the addition of a new kitten to her household, hold the reader’s interest.

Krakow makes new friends and follows new leads until she runs into the path of a killer. One reviewer wrote that they had no trouble figuring out the killer. I, on the other hand, got a bit fooled. Will you? Try it and see.

I don’t like books where cats do super-cat things, like talk, point, or act un-catlike. Clearly Simon is a cat lover and owner. The book has a satisfying ending for everyone involved including the many felines.

I’m anxious to read the second installment in this series–Several are out and ready for my consumption.

If you like a good mystery, try The Clock Strikes Midnight. We are having a Facebook Launch Party on 11/25, the release date from 3pm to 4pm ET. Join us and win lots of prizes including the tote and pen and notebook below. 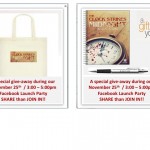