When I first started reading Kate Alcot’s the Dressmaker, I nearly stopped. I didn’t want to read another book about the Titanic. So much had been written and written well. But after reading the reviews, I decided to plow forward. 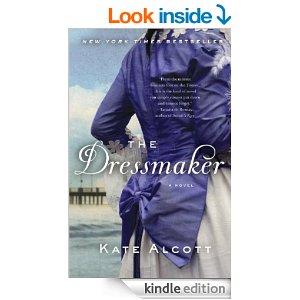 This book takes a different angle than most Titanic books #dressmaker

Instead of focusing on the sinking and placing all emphasis on that tragedy, it looks at the survivors and what happened to their lives. The author uses the actual transcripts from hearings that occurred after the disaster. Just like what would happen today, everyone demanded knowing who was responsible. Was it the shipping company? The captain? The people in charge of safety? And what about those people on the lifeboats? Did they save everyone they could? Did they let their fellow passengers die?

The author violated point-of-view 7 times by my count. Yes, I marked each one. Furthermore, she added some silly fictitious romance that really did not add to the story. Being a novel, she had every right to do that. But, I became very bored with it.

Her main character was a servant, Tess, who was a proficient dressmaker. In the beginning of the story she was a strong character. As a reader I was sympathetic to her and impressed by her bravery. But, later on she becomes meek and even wishy-washy. My eyes glazed over with boredom. When would she do something?–stay or go.

As for the romance, it very poorly written. As other reviewers pointed it, the dialogue was stiff and unrealistic. The characters (both men) not at all interesting. And, Tess took way too long to make up her mind.

Lady Lucille Duff Gordon, the historical character, was depicted as despicable as she probably was in real life. She was never likable. What possessed Tess to stick with her for so long seemed unrealistic. Nonetheless, it was fascinating the way the author wove in themes of the difficulty woman found in the workplace as well as negative views of strong women. Was Lady Duff Gordon sexually assaulted or did she push a struggling survivor off the lifeboat? The book never made that clear.

I would only give this book 3 stars #dressmaker

. Had the author spent a bit more time and tightened up the writing (point-of-view issues), I might have given it more. I cannot recommend it as a Must Read.

If you liked this review, sign up for regular blog posts on the RSS feed or sign up for 2 chapters of The Clock Strikes Midnight and all updates about it’s November 25 launch.