The word, “feel,” connotes telling. When you say Jake felt anger, you are telling.

This becomes a major conundrum in the world of creative writing. We want our characters to have feelings, strong emotions, but how do we convey those emotions in different ways to our readers? 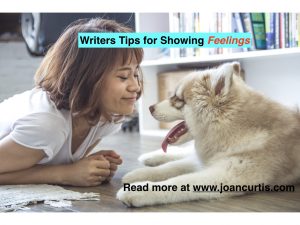 She looks at him as if she just bought a new bag and he vomited in it. Think about that description. Yes, it’s telling, but wow, it tells so much. We know exactly what she thinks about this person she just looked at. I’d say total disgust, wouldn’t you?

She says the word “team” in much the same way as Britt-Marie says “cup” when she’s got a plastic mug in her hand. Here the author describes the feeling by using that character’s quirks. Britt-Marie hates plastic mugs. In fact, she considers anyone who drinks from one rather uncouth. Again, we sense the feeling without the author telling us what that feeling is.

The reason we want to show the reader feelings rather than simply tell them is it challenges the reader. It makes the reading more enjoyable. If I simply say, “Ted felt sad when he looked at his wife’s dresses hanging in the closet,” I’m leaving nothing to the readers’ imaginations. When I use some of the techniques above, I allow the reader to imagine the feeling. The worst thing you can do as a writer is to show and then tell. By this I mean, Imagine if Backman had written, “She looks at him as if she just bought a new bag and he vomited in it. She felt disgust.” Had Backman done this, I probably would have thrown the book across the room and never read another word of it. (What feeling might that have expressed?).

How do you show your character’s feelings? #writingtips

Here are some more tips from my writing desk.