. If a scene doesn’t work or no longer moves the story forward, rather than trying to fix it or repair a broken phrase, why not delete it? Nonfiction writers don’t have that much freedom. They deal in facts and some facts can’t be deleted. 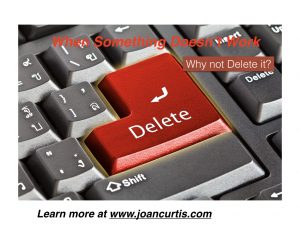 In fiction, however, we can delete people, scenes, even chapters. Yes, we can be unmerciful with the delete button and often that strengthens and streamlines the work.

They leave passages in the work that confuse or annoy readers and many often wonder what was that all about. They refuse to delete the long, soap-box diatribes from characters who are really speaking through the author. Once the writer creates a scene, it’s so hard to let it go. After all, it’s beautiful writing. Right? And what about deleting characters? Perhaps there are too many people cluttering up your story. To axe someone is quite difficult.

Nonetheless, I have found my best friend is the delete button #writingtips

When I’m struggling to fix a scene or to make it fit in a story that has evolved into something else, if I cut it all out—you know—just to see what it would be like without it (but, of course, I’m gonna put it all back), much to my surprise, the story works better, much better. I often save the scene or the character or whatever I’d deleted for use later or in another book. But, in truth I rarely go back to it. Saving it, though, makes me feel better.

So, what is your relationship with the delete button? #writingtips

If it’s not so good, I suggest you see if you can work on improving it. My two-cents. What’s yours?