We are fortunate today to have LA Dragoni visiting our blog. She’s written many stories for both middle grade and young adult. Her newest is Book 2 in the Touched by Afterlife series. Guardian’s Touch releases tomorrow! Yippee. And you have a chance to win “One More Chapter” throw pillow cover giveaway. All you have to do is enter for a chance to win. Do it now!
a Rafflecopter giveaway

I had the pleasure of talking with LA recently and asked her many questions about her writing. But, before we get to that, I wanted to share a teaser about Guardian’s Touch.

Life has returned to normal for Tamara and Dex after helping a horde of ghosts cross over. Their brush with the afterlife affirmed one thing: happily ever after is real.

When odd pranks around the farm escalate to destruction, Tamara fears mischievous teenagers are vandalizing the neighborhood. Then Dex starts to act out of character. Meanness slips into his usually playful disposition. One day he even ridicules a co-worker publicly. Tamara watches helplessly as he seems to lose the ability to control his own actions. When Dex’s abnormal anger turns violent—toward Tamara—their happily ever after is threatened. Desperate to help Dex and herself, she sends out a silent prayer for help.

She didn’t expect Cal to come to her aid.

Now that your on the edge of your seat and can’t wait to read Guardian’s Touch, let’s talk with author LA Dragoni.

JCC: Your stories are so creative, where do your ideas come from? 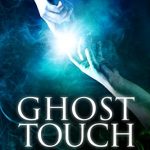 LA: “Thanks, Joan! Ideas come from so many different places, but my Touched by Afterlife series started as a dream. My barn was inhabited by an unknown amount of ghosts and I recruited people from town to come hear their stories and help them cross over. That dream eventually (like fourteen years later) became Ghost Touch. Though the story changed quite a bit from that original dream, my old barn is still their haunt. Your readers should know that this is the last week they can download Ghost Touch for only $.99.”

Guardian’s Touch, the second story in the series is the next adventure for our main characters; Tamara, Dex, and Cal. I’ve always wanted to explore the question of what happens in heaven when a person remarries after losing a partner.

I also have a time travel romance coming out in November, Again for Love. That was actually the very first novel I ever tried to write. But being a first time novelist, I couldn’t get through the middle. When I revisited the idea for NaNoWriMo (National Novel Writing Month) last year, it was a piece of cake to write, since I’ve basically been thinking about this story for…gosh, I don’t know…twenty-some years. I scrapped the original version, updated the characters, their jobs, their hobbies, and it was easy as pie – or beer, they work in a brewery. 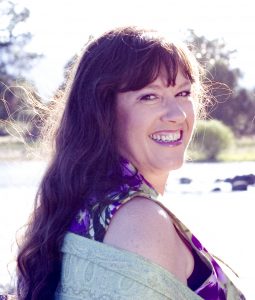 JCC: You’re so creative! I’m curious, as a young person, how did you spend your creative time?

LA: “I played make believe. A LOT. I loved to play Barbies and make up her life and Ken’s and Dawn’s. Dawn was often the little sister instead of the baby. I wasn’t too much into playing house. But – as crazy as it sounds – I also had a ton of imaginary friends. My constant human friend was a girl my age named Cynthia. And I had a colony of elves that lived under my bed. They’d come out at night, after lights out, and protect me from all the things that went bump in the night. I knew all of their names and talked to them. I guess I’ve been making up stories my entire life.”

JCC: If you had to identify one person who sparked you to be the kind of writer you are, who would that be?

LA: “One person, Joan? Seriously? Obviously there are a ton of people who shape the writer I am, my critique partners, the awesome support I receive from fellow writers, my husband and children. But okay, fine. One person.

As cliché as it sounds, I’m going to have to say J.K. Rowling. I’ve always written, but it wasn’t until Harry Potter inspired me to finish my first novel that I ever considered writing professionally. Most days I’d like to thank her for the inspiration, but there are tough days when marketing efforts don’t pay off, or I get a less favorable review that I’d like to curse her with one of her own spells.

JCC: Hahaha. Thanks for the one person. I know JK Rowling would be honored. Moving on, how do you go about writing your world view? What tips might you share?

LA: “It’s important to me to create a familiar, knowable setting for my characters. Even if it’s fantasy and set in a made up world, it’s important that what’s happening to the characters is expected and resonates with the reader. Once the reader is comfortable in the setting, I try to throw in a twist. Something unexpected. Whether it’s a different view on the afterlife – as in my Touched by Afterlife series – or a new take on time travel, which you’ll see in November. I love to try to find the unexpected within the normal. Maybe it’s my way of showing readers there are different ways to view common situations. I would suggest that new writers also try to work what is important to them into their stories without bashing readers over the head with it. It makes a stronger impact when it’s within context and the reader is like, “Oh, wow, I never thought of it that way.” Because now they’re thinking of it that way.”

JCC: I love that attitude about writing. I, too, try to think of an unusual twist but, like you, I try to make it believable. So, given that, share with us what kinds of books you like to read?

LA: “I honestly read any and all fiction. I rarely read non-fiction. Mostly books on the craft of writing or the business side of publishing and the occasional biography of a person I find interesting. Fiction is my thing. I write middle grade and young adult fiction under a different pen name and read mostly young adult. I love romance especially, but certainly don’t limit myself. I’m not too crazy about political intrigue, but my tastes change over the years, so I might love it one day. Anyway, I read more than 100 books a year. I call it research.”

JCC: Wow! 100 books a year. That’s quite a feat! Particularly since you are also writing. How do you go about letting people know about your books?

LA: “Ha ha – well isn’t that a good question? This is THEE most difficult part of writing. For me at least. I love to visit blogs (so, thank you!), I have a newsletter, I’m on Facebook, and Twitter. Mostly, I hope readers enjoy my books enough to talk about them, write reviews, recommend them to friends, give them as gifts, suggest them to librarians. What we do is for the readers. They let us know how well we do by talking up our books.” 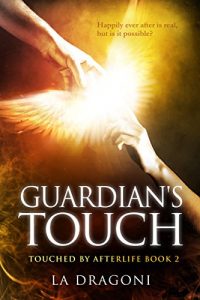 JCC: Why don’t you talk up Guardian’s Touch for a second. What do you like most about this new release?

LA: “I think I like the little things most. The reason Cal is back is (hopefully) not quite what the reader will expect. How the tension builds and dissipates at unexpected times. How Tamara grows – she’s only twenty and besides dealing with ghosts, she is forced to be completely independent and that makes a person grow in different ways than someone who can gain their independence with the support of family surrounding them. Dex, poor Dex. His journey is nuanced as well and I expect the reader will change their mind about him throughout the book, but hopeful adore him as much as I do in the end.”

What a great interview! I know you can’t wait to read this new series. Be sure to visit LA Dragoni on her website and to write those reviews on Amazon once you read these great books. Thank you, LA, for join us today and good luck with your new release.

LA Dragoni isn’t too particular about who falls in love or where they fall in love. Whether it’s paranormal, mythical, or time travel, LA simply considers it her job to divine their story and share it with you. She lives in Central Oregon with her husband and children, but haunts ghost towns and cemeteries throughout the west, in search of the next adventure to sift through her storytelling brain. Learn more about LA and her work at ladragoni.com