I understand what that means, and I work hard to avoid those ‘trite’ expressions that haunt every writer. But, I do know one thing. People talk in cliches. Have you ever heard anyone say something like, “I’m colder than my mom’s house in the winter”? That’s a great way to say, “I’m freezing to death.” The first is not a cliche but the second is. When writing descriptions or back story or internal dialogue, avoiding cliches is easy. But when writing dialogue it’s hard because it’s hard not to make the dialogue sound stilted. 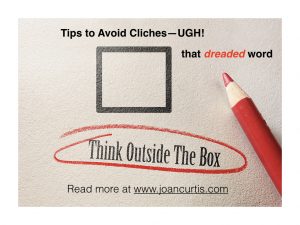 Let’s look at the definition of cliche:

A phrase or opinion that is overused and betrays a lack of original thought:

“the old cliché “one man’s meat is another man’s poison.””

“each building is a mishmash of tired clichés”

Indeed, good writing is original thought. A turn of phrase that surprises the reader with its originality. Of course, unless you’re a poet, every word of phrase can’t be original. Cliches creep into our writing because it creeps into our thinking and our natural vernacular.

Nonetheless there are ways to avoid cliches. Here are some tips you might try:

These are a few of my suggestions for ways to avoid cliches. What suggestions do you have?

I’d love to hear your comments on my blog. Why not stop by and sit awhile (cliche?) #writingtips