Whether the pet is a dog or cat, I enjoy reading about the interaction of the character with the pet. Pet owners have unique responsibilities that writers should not take lightly. My protagonist in the Jenna Scali mystery series owns two cats. Those cats depend on her for their food, affection, and care. She goes about her day, but not forgetting to feed the cats or empty their litter box. Dog owners must add walking the dog or letting the animal out at certain intervals during the day. All these activities add to the main character’s personality. Does your main character enjoy walking her dog or does she feel it’s an imposition? Often in mysteries, cats and dogs can sniff out the bad guy. Their ears go back or they growl. Paying attention to these details is the job of the writer.

Here are some tips for writing animals into your stories:

Tip #1: The animal must behave like an animal. I do not enjoy books where the cat solves the mystery, that is, figures everything out and does very un-catlike things. Instead, the challenge of the writer is to allow the cat to do normal cat things but the way they do them give rise to questions that might lead to solving the mystery. Dogs might dig something up that had been hidden. Animals have many behaviors that are typical of that animal but can create suspense in th 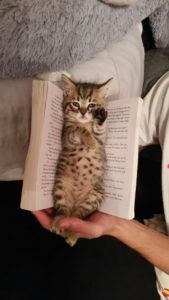 Tip #2: Don’t forget about the animal. If you character has been kidnapped, that character might worry about her life and whether or not she’ll get out of the mess she’s in, but she will still worry about her dog. Who will let him out? Will he think I abandoned him? Is he hungry?

Tips #3: If the animal is threatened, make sure you’ve got good reason for it. In the e-Murderer one of Jenna’s cats is cat-napped. The killer did this because he knew how it would affect Jenna. She has a strong attachment to her cats. But, the cat escaped. Killing an animal to show the viciousness of a killer is cheap. That viciousness can be shown in other ways.

Tip #4: Animals can show a different side of a human’s behavior. You may have created an assassin who never gives killing another person a second thought. Perhaps that assassin sees a hungry dog and feeds it. Perhaps that dog follows the assassin home. Our villains, just like our heroes, are multidimensional. Animals can help show the other side of a person.

Tip #5: Please don’t ask the animal to talk or do other anthropomorphic behaviors. There are exceptions to this rule. In the book The Art of Racing in the Rain, the dog narrates the entire book. But, he’s still a dog. He thinks like us as he narrates, but he’s interested in food, in smells and in the mood of his human caretaker. The author does an amazing job of putting us in the dog’s head.