This was the first line of Richard Russo’s novel, Straight Man. And, truth be told, this is not an easy book. As first lines go, that one ranks up there with the best. It captures the essence of this book. Indeed William Henry Devereaux, Jr. is a difficult personality to pin down. He’s insecure and yet careless. He loves but fantasizes. And he always has to pee. 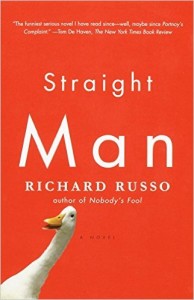 When I began this book, I called it a satire on the academic world #amreading #bookreview

Many of my friends and colleagues who have spent their careers in university environments would enjoy the games Russo plays with academic politics. He demonstrates through his main character’s cynicism how absurd that world can be. The things that matter are really so trivial. While reading on, I felt as if I was reading Bonfire of the Vanities for academicians. Clearly the last paragraphs of the book continues in that vein and if you don’t read anything else, read it.

But, later, it became clear there was more to it than that. I’m not sure I ever related to William Henry Devereaux, Jr. I did pull for him. I kept wanting him to tell the truth. His silence or his sarcastic comments left others charging him with much more than even his fantasies imagined himself doing. Nonetheless, the book is funny. On many an occasion I laughed out loud. Mr. Russo has a great sense of humor.

And, he’s one good writer. Here are a few examples I noted:

As I tell my students, all good stories begin with character

In English departments the most serious competition is for the role of straight man.

A liberal arts dean in a good mood is a potentially dangerous thing.

I began to see signs that the underpinnings of my mother’s personality were beginning to corrode in the salt water of my tidal persistence.

William Henry Devereaux, Jr. is the chairman of the department of English at West Central University in Pennsylvania in a moderate size town. He is holding onto his position by a thread. Others are anxious to knock him off and he’s willing to comply. Meanwhile we learn of his relationship with his wife, daughter, son-in-law, friends and colleagues. He’s usually an outsider looking in.

This is not an easy read. It is not for the feint of heart #amreading #bookreview

There is no plot. There is a lot of rambling inside the head of William Henry Devereaux, Jr. Nonetheless it made me laugh. That in and of itself deserves 3 stars.