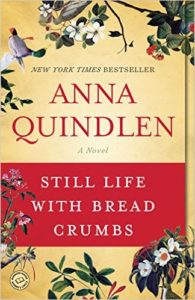 I don’t know how I stumbled on Still Life with Bread Crumbs, but I’m glad I did #bookreview

It was a very pleasant read. Anna Quindlen created a believable female character of a certain age. The book is about Rebecca Winter, a semi-famous photographer from New York City who has fallen on hard times. Her parents are both in financial ruin and she must pay for their care in the final years. That plus her expensive Manhattan life left her with few resources to fall back on.

She moved from the city to a small community upstate where she hoped to hang out until she hit on the next big photographic success. Renting a cabin in the woods, she was ill-prepared for solo country living. She met the colorful people in this small town and although rather reclusive, she got to know each as did the reader. At first quite ambivalent about living in this remote place and wanting desperately to return to the city, she balked at becoming too attached. With time, she succumbed to the charms of the people and the place.

At first I feared it might be depressing, but it is not. In fact, it’s uplifting. The main character made good choices and allowed herself to open up to the new world she found herself in. This is a nice literary read without much plot. Nonetheless, it captured my attention because the writing was clear, crisp and the characters complex.

I give this book 4.5 stars and include it on my list of Must Reads. I will also check out ofter books by this author.

If you liked this review, read my other reviews on my blog or share your thoughts.