Today I’m excited to welcome the mystery writer, Patricia Gligor to our blog. She’s here to tell us about her journey as a writer as well as what and how she loves to write.

We will also hear about her latest book in the Malone Mystery series, Desperate Deeds #patriciagligor #desperatedeeds 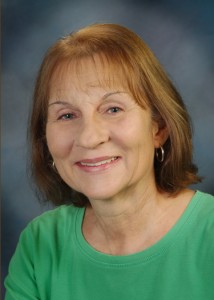 JC: Thank you so much for joining me today, Pat. Let’s begin with you talking about your journey as a writer. When did you start seriously writing?

PG: I started writing poetry when I was about ten years old and, when I saw my byline on a poem I’d written for my Sunday School magazine, I knew I had to be a writer. After that, I wrote short stories for several years and a few were published locally. I didn’t begin to write my first novel, Mixed Messages, until 2002, even though I first got the idea for it in 1995 when I was taking a walk and came upon an old Victorian. I remember standing there, gazing up at the house, and thinking What would these walls say if they could talk?

JC: I noted that your books are published by a small press. Mine are also coming out with a small press. How did you manage to land your first contract?

PG: After I spent (wasted) more years than I care to mention trying to find an agent so that a Big Publisher would consider my novel, I finally began to submit to small press publishers. About that time (2011), I attended a local event. Two publishers were present and that’s where I met the publisher of Post Mortem Press and his wife. I sent them my manuscript for Mixed Messages and, happily, the rest is history.

JC: Your experience sounds very similar to mine. Apparently, however, you like to poke around old houses. One of your reviewers said they loved your vivid descriptions. I can’t help but wonder if there’s a connection between the two.

PG: There definitely is! I grew up reading Judy Bolton and Nancy Drew mysteries in a big old house with woods behind it as far as the eye could see. Fertile ground for a young girl’s imagination. I started concocting stories, “what if” scenarios, that I acted out with my best friend, her brother and my younger brother.

Looking back, I think I often scared the heck out of them with some of my tales #patriciagligor

JC: Very funny. I’m sure you did scare them! That leads to my next question about where your ideas come from–the twists and turns that happen in your stories. Do you use an outline? Talk a bit about your writing process.

PG: My writing process isn’t one I’d recommend to others but it’s the only one that works for me. It goes like this: I have an idea, I jot it down on a piece of paper, another idea, jot it down. Eventually, I organize those scraps of paper into a very basic outline. The process continues until I feel I’m ready to produce a chapter-by-chapter outline. When that’s complete, I begin to write the first draft. As to where my ideas come from, the only answer I can give is anywhere and everywhere. But, oh, how I wish I could be a “pantster”! (a writer who writes by the seat of his/her pants–without an outline).

JC: You seem to like mysteries with strong characters (That’s what I write as well). Tell us how you manage to balance characterization with plot.

I’ve always been fascinated with psychology, why people say and do the things they say and do, and I suppose that was bound to come through in my writing. In the first two books in my Malone Mystery series, Mixed Messages and Unfinished Business, I delve deeply into the minds and hearts of my main characters. The third book is a bit different; it’s definitely character driven but there’s more emphasis on plot. With my WIP (work-in-progress), even more so. Having “established” in the first two books who my characters are and what kind of people they are, I hope my readers have come to know and love them as much as I do. Also, I think we writers change and grow along with our characters and our books will reflect that. At least I hope so.

JC: Among the characters you’ve created which character is the most fun to write about?

PG: It’s interesting that one of the oldest characters in my series and one of the youngest characters are the two I most enjoy writing about. Olivia Berger Koch is seventy-nine years old and, although she’s confined to a wheelchair, she is one of the most upbeat people I “know.” Then, there’s eight-year-old Danielle Kern, who is extremely mature for her age; she’s a delight. By the way, in Desperate Deeds, Dani decides that she wants to be a mystery writer when she grows up. 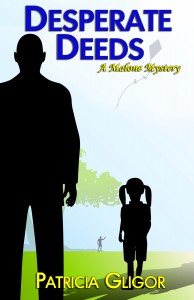 JC: Tell us about Desperate Deeds, your latest book, and what you hope readers will get of it.

PG: In Desperate Deeds, a little girl has been missing for several months. Ann Malone Kern, my main character, is a very compassionate person and, as she watches the news, her heart goes out to the parents of Kelly Kramer. And then, the unthinkable happens. Ann’s six-year-old son, Davey, goes missing and Ann is desperate to find him. The message I want readers to come away with is the same for each of my books:

No matter what happens in your life, there’s always hope! #patriciagligor

JC: What a great message, particularly with a theme around missing children. Tell us what you are working on now.

PG: I’m working on the first draft for the fourth novel in my Malone Mystery series and I’m very excited about it. Although my first three books take place in Cincinnati, Ohio, in book four, Ann and her two children visit Ann’s sister, Marnie, in South Carolina. They rent a condo on Fripp Island for a relaxing beach vacation. Unfortunately, for Ann, who desperately craves some peace and quiet after all she’s been through (in the first three books), she and her sister become involved in solving a murder.

JC: That sounds very intriguing. I’ve been to Fripp Island. That’s a great place to set a murder mystery.

Thank you again for being here today. I’m sure our readers have some questions for you or some comments for you.

To find out more about Patricia Gligor, explore her Amazon author’s page and visit her blog #patriciagligor

As Ann Kern starts her new business as an interior decorator, the temperatures have risen, tulips and daffodils are in bloom and there’s a feeling of endless possibilities in the air. She has no idea that her world is about to be turned upside down.

When Janis Riley, a woman for whom money is no object, contacts Ann to redecorate her house, Ann is elated. But her initial visit with her first client leaves her with mixed emotions. Why did Janis react so strangely to seeing a photo of Ann’s six-year-old son, Davey?

But Ann has bigger problems. Her husband, David, a recovering alcoholic, has lost both his mother and his job and Ann worries that he’ll start drinking again. To add to her concerns, their next-door-neighbor, Dorothy Baker, is severely depressed but Ann’s efforts to help her are rebuffed.

Ann is terrified when she wakes up the day before Easter to find Davey gone. Another child, Kelly Kramer, has been missing since December. Has someone kidnapped both children? And what, if anything, can Ann do to get her son back?

If you enjoyed this interview, sign up and become part of our community. You’ll also receive the first two chapter of The Clock Strikes Midnight.