One of the pleasures I have as a writer is meeting other authors. What fun it was to run into the wonderful crime writer, J.R Lindermuth. He agreed to join us today and share something about his writing career and his new book, A Burning Desire. 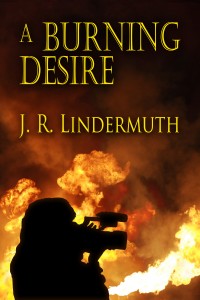 J.R began his career as a newspaperman. He is now a librarian in an historical library. During his “retirement” he has published 26 books! Three pages listed on Amazon. Wow. I can’t even imagine. And, if I’ve miscounted, I’m sure my readers will forgive me. The bottom-line is that J.R. is a prolific writer.

JC: Thank you for taking the time away from your writing to join us today. As I said, you went from a newspaperman to a novelist. Tell us about that transition.

Writing fiction, particularly novels, had been a goal since early in my high school days…

It was the Army decided I had the makings of a journalist and sent me to J-school. That provided me the means to make a living, with no heavy-lifting involved, while I sought markets for my fiction.

Finding those markets took longer than I might have liked. But being a reporter covering a variety of beats and later an editor gave me a wealth of experiences and skills which have helped my other writing.

JC: I, too, have a journalism background and I found it to be most helpful in my writing. I learned things like how to think at the keyboard (very helpful to a writer) and how to write succinctly.  I have no experience as a librarian, however. My guess is your work in the library, particularly in the area of genealogy brings another dimension to your writing.

You gain an insight into people and how they struggle to meet the challenges life throws at them. This helps the writer to create realistic characters, to portray motivation and to understand people throughout history have coped with the same issues, experienced the same emotions, though influenced by the time in which they live.

JC: I’m sure your work with helping people uncover the people of their past has helped you to create the fascinating array of characters you’ve introduced to readers. But, looking over the wide number of books you’ve published–crime thrillers to a Christmas story–what do you enjoy writing the most?

JRL:  I cannot tell a lie—mystery/suspense is my favorite genre. And, if you read any of my other stories or novels, you’ll always find some sort of mystery element embedded.

JC: Many writers struggle along the path to publication. Tell us about your journey.

JRL: It was a long and often frustrating process. I worked for nearly 40 years as a reporter and/or editor. During that period I published short stories and articles in a variety of magazines.  Novels went out and rapidly returned with a “thanks, but no thanks” response.  A veteran New York agent took me on and then died. I kept trying.

I didn’t succeed in publishing a novel until after my retirement. That novel, “Schlussel’s Woman,” a historical mystery, was accepted by a publisher who went bust before the book could be released. Lacking the many options available now, I published it and another through iUniverse before landing a contract with Whiskey Creek Press in 2006 for the first in the Hetrick series.

JC: OMG! Talk about bad luck. First your agent dies and then your publisher goes bust. You are a great role model for the aspiring writers out there. The goal is to persevere no matter what. Congratulations on doing that.

Check out JRL’s blog Lindy’s Lair. How do you find time to write your books and to blog regularly?

JRL: We’re told these days blogging is an important aspect of building a marketing brand. I’m not entirely sold on that. Don’t misunderstand—there are some very good blogs out there. But the energy it takes to produce them on a daily or weekly basis detracts from the writing of fiction, which is a wholly different animal.

I probably should blog more often than I do. My preference is to do a blog when a subject grabs me and not because of any schedule imperative.

JC: Let’s talk a moment about your characters.  In one of your blog posts you wrote:

“I like to be surprised by my characters.” @jrlindermuth

Give us an example of when you were surprised

JRL:  I’m not much of an outliner.  I like to come up with a basic crime/idea and then see where my characters go with it.

For instance, “The Limping Dog,” a standalone novel, is about the theft of an innovative microprocessor system. But my initial impression was of a man knocking on a door. He turned out to be an insurance investigator who had a different intent, which eventually circled back to the same crime.

In the seventh Hetrick novel, which I’ve just submitted to the publisher, Officer Flora Vastine, Stick’s protégé, who was a minor character in the first book, takes over as protagonist. Sticks, Harry and Brubaker are all there, but Flora takes precedence in the investigation.

Writing a series is very challenging. You’ve written two series: the first with the protagonist Stick Hetrick (7 novels) and two books starring Sheriff Tilghman. What have you found to be the biggest challenges with writing series characters?

JRL: Making sure your character continues to grow. Change is a part of life and if that doesn’t happen with your characters, they will grow stale and become mere caricatures. Hetrick, for example, has moved on from his original position as a consultant to his successor as police chief to a new job as county detective and from a widower to a man with a renewed love life.

JC: I know my readers are dying to learn more about A Burning Desire. Here’s a short blurb:

The past comes back to haunt former police chief Daniel ‘Sticks’ Hetrick and his protégé . ….

At first, the minor nature of the fires inclines authorities to see them as pranks, possibly the work of juveniles. Then, tension increases in the wake of a murder at the site of one fire and an increase in the value of targets.

Thank you for being with us today. Tell us where we can find all your books.

JRL: I’m a member of EPIC, International Thriller Writers and, currently, vice president of the Short Mystery Fiction Society. There are no independent booksellers in my immediate area (the closest are about 60 miles distant). The historical society library has been generous in allowing me to display my books for sale and I depend a lot on the support of area public libraries and the fans I’ve gathered over the years. Like many in a similar position, on line promotion is vital to getting the name out there.