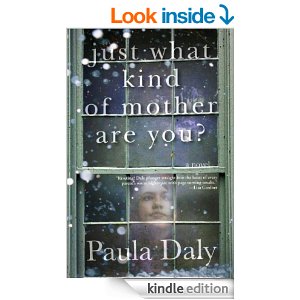 With a title like this, who wouldn’t read the book?

Indeed, not being a “mom” myself, I had some trouble relating to the Lisa’s sense of guilt. The book begins with a missing child. The child is the best friend of the protagonist’s daughter. The two girls were supposed to spend the night together, but the friend didn’t come. The story revolves around Lisa’s guilt. She considers herself responsible because she never called the mother to tell her that her daughter didn’t come spend the night. She puts the blame on herself. And as it turns out, so does everyone else. Personally, I couldn’t see that it was her fault.”

But, the author tried to make it as poignant as possible.  I guess isn the realm of helicopter moms in today’s world, this might make for a good storyline. For me it was stretching things. There were a few things that didn’t quite tie together once the truth is told. I can’t elaborate on those because I don’t want to create spoilers.

She not just an insecure mom, she’s also an insecure wife. I suppose the only thing she feels confident about is her job in animal rescue.

I didn’t like many of the characters–particularly the missing child’s parents. Even though I could feel their pain and the agony, I never “liked” them. And, neither did the protagonist. She did the “right” thing, but did she do it out of genuine friendship or guilt? That was the question the story kept asking. If I had to pick one likable character it would be Lisa’s husband Joe. Otherwise the rest had major flaws. That didn’t diminish my enjoyment. In fact I like books where the author shows flaws in the characters.

Perfect protagonists are no fun to read! @pauladalyauthor #amreading #review

You’ll keep turning the pages to find out what happens next. The chapters are short and before you know it, you are turning to the next one and the next.

I didn’t feel cheated (as I did in Gone Girl). The only reason I would give this book four rather than five stars is the few inconsistencies I noted earlier.

If you like this review, you should join my community by signing up on my site. You will get a sample of my new release The eMurderer as well as a bonus giveaway How to Write Publish and Sell a Novel.