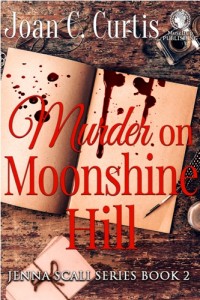 Pre-Order by clicking here for just $3.99

The second book in the Jenna Scali series is now ready for Pre-Order. Let’s spend a little time with Jenna’s BFF Quentin Pearson to get the inside scoop about this new book.

JC: What made you decide to go to the wedding with Jenna?

Quentin: She didn’t fancy going. She and the bride go way back. They knew each other growing up. But some bad business happened back then and Jenna wasn’t keen to go. I suggested it might be good for her to get away. Then, I had this sudden idea, why don’t I go with her.

JC: How did she respond to that suggestion?

Quentin: At first she said no because she was determined not to go. But, later she decided it might be a lark. After everything that happened, I’m really glad I went.

JC: I know you can’t tell us about what happened, but how about telling us about the place, Moonshine Hill.

Charming. The guest rooms are small and the bathrooms smaller. I couldn’t go in mine and sit with the door open. But, the porches and views are amazing. And this place was surrounded by mountain trails around seven fresh water springs.

JC: How far from the nearest town were you?

JC: Y’all went there in the spring, right? What are the mountains like then?

Quentin: Green is the best word. Everything is greened out in such awesome shades. The woods around the inn were thick and shaded. There were also beautiful flowers, rhododendron, locust, wisteria and much more. Green mixed with the flowers made it a great time to be there. Not like the autumn, but special.

JC: And the weather was warm?

Quentin: Jenna complained about being cold most of the time. It was jumper weather, or as you Yanks say, sweater weather. Not as warm as we expected, but great for morning jogs. Jenna and I went out jogging a couple of times with several of the guests.

JC: Indeed it sounds idyllic. Why was Jenna so reluctant to go?

Click to order Book 1 in the Jenna Scali mystery series

Quentin: I can’t tell you much without ruining the story. But what I can say is Jenna’s friend, Marcy Hawthorne, the bride-to-be, came loaded with secrets. None of us realized how much she was hiding until it was too late. Jenna suspected her friend was up to bad business because that was her style. After what Jenna went through last year, you know, with the e-Murderer, she was reluctant to get tangled up with Marcy.

JC: But, she went and she got good and tangled up, right?

Quentin: Good job I was there. I helped her stay out of danger. Well, I tried to anyway. I promised Detective Rich I’d watch out for her, but she’s a stubborn thing when she thinks a friend is in danger. That’s one thing I love about Jenna–her devotion to her friends.

JC: Tell us about some of the guests.

Quentin: Marcy, of course, the bride. Her mum and stepdad, the O’Conners. They were nice enough. The stepdad a bit obnoxious, but otherwise okay. Then there were Marcy’s dad and stepmum. I won’t go into much about them except to say the stepmum was quite a looker. Marcy’s ex-lover, Jimmy, showed up to cause trouble and that he did. Her Aunt Bertha came and stayed inebriated most of the time. Then there was the groom, Tom Slade–handsome and rich. His mother was there along with his cousin and fiancee. Finally, Jenna’s mum came because she’s a pal of Tom Slade’s mum.

JC: That’s quite a cast of characters.

Quentin: I left out the minister and his wife. The groom’s body guard. And, of course, we had the inn staff. That’s the lot of them, I believe.

JC: So, Quentin, if you could tell our readers why they might enjoy this book, what might you say?

Quentin: It’s your typical wedding with warring parents and stepparents. But, what makes the book a fun read is the place, Moonshine Hill, with all its beauty and intrigue as well as the unfolding secrets around those quirky characters. My role in the story added to the fun.

JC: I’m sure it did. Thanks for stopping by. We are all looking forward to reading the second Jenna Scali mystery when its released on August 23. Meantime, readers can pre-order the book today for just $2.99.

If you haven’t read book 1 in this series, check out the book trailer for the e-Murderer. Quentin appears with Jenna in both books.