She is releasing her first novel, The Devil’s Music on May 1st. You have an opportunity to hear about it first today and to learn more about Pearl. Be sure to pre-order her book.

If you’re the first to comment, you’ll be the lucky winner of Pearl’s story, The Peach Tree #giveaway @PearlRMeaker

JC: Hi Pearl and welcome to Joan Says, Writes, Reads. I’ve read a number of your short stories on your blog and love your writing style. That’s why I’m excited to know that your first novel will soon be released. Let’s spend a little time talking about you. What happened to make you decide to go from mystery reader to mystery writer?

It got great reviews so I kept writing Lord of the Rings fanfiction. Over the next 6-7 years I wrote around 200 stories and had a lovely group of regular readers, several of whom started to encourage me to write original stories that I might be able to have published for sale.

When I took a novel writing course, the first lesson required submitting two ideas for stories one of which you’d work on for the class. The ideas I thought of were both mysteries. In fact they were related stories with the same main characters. The one that was chosen to use for class assignments is now The Devil’s Music, the first book in the Emory Crawford Mysteries Series that releases May 1st. The second idea became the second Emory Crawford mystery, which is now with my publisher beginning the publication process to be released in the fall of 2015.

I didn’t sit there and say, “I want to be a mystery writer.” Those were the stories that came to me when I needed ideas for the course, and I suppose it makes sense that my muse would guide me to my favorite genre. 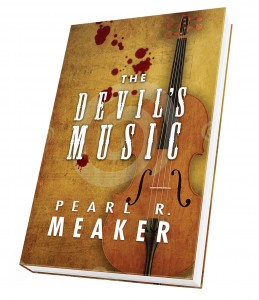 JC: I can relate to what you’re saying. How wonderful that you built a fan base for your fiction before you released your first novel. Before we go any further, I’m going to share the blurb about The Devil’s Music so our readers will know more about the book.

The Devil’s Music is the first book in the Emory Crawford Mystery Series.

But who is Emory Crawford?

She doesn’t do martial arts – she knits, crochets, does crafts, and cooks.

She’ not a swinging single – she’s a wife and empty nest mother.

She’s not a long and leggy model type – she’s a typical middle-aged female.

She’s not built like an athlete – she’s soft and squishy.

She’s not a power career woman – she’s a homemaker.

And when an acclaimed scholar and musician is found murdered on the Twombly College campus where her husband teaches chemistry and forensics, Emory Crawford emerges as the most inquisitive, persistent and clever amateur detective since Miss Marple.

So, Pearl, we’ve learned a little about Emory. I wonder what she might say about you, her creator.

“Emory here. You asked what I would tell you about Pearl, so here goes.

Pearl is a better writer than she gives herself credit for, but then, she’s too hard on herself about most everything. She’s always been a rather slow person. Oops! I’d best amend that: not slow mentally; slow motion. Things always take her longer to do than she thinks they’re going to – and longer than other people think they should take her to do. But that’s OK. She likes to stop and enjoy the scenery as she goes through life. You’ve most likely heard the expression “Never a wasted minute.” Well Pearl likes to say, “Life happens in the wasted minutes.” She values the time to daydream, to look closely at the world and to learn all sorts of tid-bits about all sorts of things.

She uses up some of her energy fighting depression and other effects of her ADHD. Yes, I know. I just said she’s a slow mover and now I’m saying she has hyperactivity disorder. Her mind and emotions are what’s wound too tight, not her physicality. That’s often the case with females with ADHD, which is part of why, for a long time, it was thought only males had the disorder. It causes her a fair amount of troubles with work – even with her writing – but it is also part of her being observant, curious about everything and being able to hyper-focus on things that interest or intrigue her.

Pearl is a creative person like I am. She fades when she’s not making something with her hands. Arts, crafts, special meals, photography, writing – and most usually it’s something for someone else. And singing and playing fiddle too, though she’s not as good a fiddler as I am, but then, I started playing at a younger age. She didn’t start playing till she was 50 years old. She also used to play baritone ukulele and various types of flutes.

She’s a good wife and mother, her husband and children say so, not just me. She likes to care for those she loves, though often the forgetfulness of her ADHD makes her seem less caring – she doesn’t call or email like she knows she should. Pearl loves to do things that make people happy, makes them glow and smile. Things like all the crafts she makes for folks, or stopping strangers in stores or when walking down the street to tell them she likes what they’re wearing – telling them they’re lookin’ good.

Like me, she loves animals – both wild and domesticated. She’s always had pets. She had a horse from late elementary age till her first year of college. Had several parakeets, fish and a variety of other critters. For the past 30 years or so she and her family have mostly had cats. They have four of them right now.”

JC: Thank you, Emory. Now we know a lot more about Pearl. Wasn’t that fun? Pearl, we know you began your writing with fanfiction stories. Tell us about your journey from there to novel writing and onto getting published.

As I said earlier, I began with the 6-7 years of writing LOTR based fanfiction for public perusal and review on various fanfiction archives. This was great experience and a good learning opportunity. I owe my group of readers a huge Thank You as they started me on my way.

The next step was having two short stories published by a now out of business magazine. Dead Eyes is in the online archive of Abandoned Towers, and The Peach Tree, appeared in their last print edition (and is the prize for the first person to comment here). This was while I was taking the entry level Breaking Into Print course from Long Ridge Writers Group.

My instructor – now my writing coach – Mary Rosenblum was so excited about my story ideas. In the very first email I got from her she was already saying they would be attractive to publishers. As the class went on I was having my usual self-doubts and asked her if she’d said that just because she was my instructor. She took the question in the spirit it was asked and told me “No.” She was already working as a writing coach and was (still is) very on top of the industry and knowledgeable as to what is marketable.

With that, and her continued, encouragement I hung in there and kept writing #amwriting @PearlRMeaker

When the book was finished, after about a year and a half, she suggested a couple of publishers to submit it to and I went with Promontory Press. They accepted it and now it’s on Amazon.com for pre-order and I’m still a bit in shock over it all.

JC: You were fortunate to meet Mary. We writers indeed need to hear those encouraging words. I, too, have a writing mentor. She’s not a coach, but she’s been very encouraging. With all rejection letters lining our walls it takes a tremendous amount of dedication not to give up. I’m very glad you persevered and are now in shock.

But, we are not in shock. We are happy to introduce Pearl to the world of mystery reading.Check out her links below. Pre-order your copy of The Devil’s Music.

Thank you, Pearl for joining me today. And, I encourage my readers to hook up with Pearl. She will soon begin a virtual blog tour where you can learn lots more about her. Be the first to comment on this blog and Pearl will send you one of her delightful stories.

Where to Find Pearl and her books