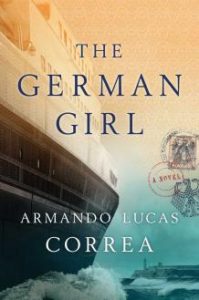 If you enjoy books written about World War II and the persecution of the Jews, you will devour this book #myreview

It’s based on an historical fact that should embarrass us all. The ship, St. Louis, sailed from Germany in 1939 full of German/Jewish families looking for sanctuary from the tyranny at home. They were headed for Cuba. Unfortunately in route, the Cuban government passed legislation that barred their entry into the country.

The people on the ship had no idea that they would not be granted asylum. They hoped to land in Cuba and begin looking for places to relocate. After leaving Nazi Germany, most felt tremendous relief to finally be sailing away. And, most had to spend all of their savings to do so–purchasing visas for the new country and tickets for the trip. The Nazi’s only allowed them to take a small amount of money with them. It was a harrowing decision but one 937 people made.

Upon arrival in Cuba only a few (about 30 people) were granted permission to disembark. The rest had to return to war-torn Europe. Families were split. The horror of it all is difficult to imagine, but Armando Lucas Correa does so. He brings this horrendous story to life with two characters, two young girls. One is Hanna, the 12-year-old German Jewess who is traveling to Cuba in 1939 with her family. The other is 12-year-old Anna who in 2014 is searching for information about her father’s family. It turns out Anna is Hannah’s great niece.  Anna’s father was killed during 911 before Anna was born.

Without telling too much of the story, I will simply say the two girls share their experiences through alternating points of view. My one complaint about this book is that it gets redundant in the end, and I found the ending quite tedious. I also questioned why the resourceful twelve-year-old Hannah didn’t show more resourcefulness as an adult.

What makes this book so poignant, however, is that in 1939 the St. Louis attempted to land in both the United States and Canada and was denied entry by both presidents. When we examine our own country’s current policies toward sanctuary for people fleeing tyranny, we must remember our own chilling past. My hope is if Americans ever find themselves in need of sanctuary, they will not face the ugliness that others have faced on our shores.

This is a good read, even if it drags a bit #myreview

It’s indeed worth reading to learn more about the people who traveled on the St. Louis–many of whom died during World War II–and to remember as we separate ourselves from others of different races and religions that we are all simply people, looking for a safe place to live and raise our families.

Check out all my reviews on my blog #myreview