I learned how it would feel to live in a repressive society where no one trusts anyone. Undoubtedly the author, Sana Krasikov, did a lot of research to bring us this story. 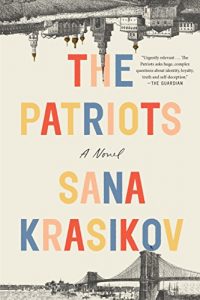 Nonetheless, the book was not well-written. The characters were not at all likable. In fact, I became very frustrated with Florence, the main character. She was naive to the point to stupid. Her lack of regard for anyone except herself probably explained her reason for abandoning her own country and her family and move to Russia in her 20’s. Florence’s son, Julian, was the most likable character. He lost his mother (who spent 8 years in a prison camp in Russia) when he was quite young and his father was executed by the Soviets. Nonetheless, he returned to Russia to live and work. The author never said why. Julian’s son, Lenny, was the least likable character of the lot. Fortunately we didn’t stay in his point-of-view long.

As for the story itself, it dragged on over many years and many pages #amreading #mybookreview

I kept looking to see when it would end. It seemed endless.  I continued to read just to see if Florence would ever win my approval. She didn’t. Was she a traitor or someone caught in a very bad place? Would I have done what she did (very bad things) just to survive? I can’t answer these questions, but I can say, I found her refusal to leave Russia even after her release from prison, unbelievable.

There is a lot of narrative and internal dialogue. Not a lot of action. And, the author portrays current-day Russia as quite corrupt. Perhaps it is.

So, what did I learn? I had no idea that idealist Americans went to Russia as some sort of “salvation.” They went to a Communistic country looking for a way of life that was purer than what they had in the United States. Instead they found repression, lies and later imprisonment. Once they realized their plight, they tried to come home, but the US would have none of it. They left on their own accord, so be it. Those people were abandoned by their natural country and often executed as spies. This was all in the beginning of the Cold War.

The book teaches. It’s well researched. But, it’s a boring, long read. If you can stand that, then pick it up. As for me, I can only give it 3 stars.