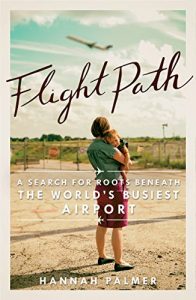 The author tells the story as if a memoir. She lived in several of the small communities that succumbed to the growth of the world’s busiest airport. Her experience growing up there, leaving the area and then returning gives a unique picture of what happened and how people survived while a mammoth urban project stretched its tentacles.

I have to say I found some of this book quite fascinating. Most of us who travel to the Atlanta airport do not think about the destruction it left in its path. We do not consider the homes, communities and businesses that used to lie beneath our wings. At first I enjoyed learning what happened to these establishments. Later, I got rather bored. First, I had to ask myself why was the author so attached to homes she could barely remember? She lived only a few years in each house she searched for and the one where she lived the longest, she admits she didn’t like. Most people have some attachment to the house where they grew up, where they spent years and years. My husband is one of those people. He enjoys going by his childhood home and seeing what has become of it. As for me, I lived in my childhood home for twelve years. My earliest years were spent elsewhere as were my later years. My attachment to that house is minimal and yet, I lived there longer than Mrs. Palmer lived in any of her houses.

At some point, I began to wonder if the author’s passion to find out more about the torn down houses where she lived wasn’t an unhealthy obsession. If not that, it was indeed odd. Toward the end of the book, we learn that the author is pregnant. Perhaps pregnancy stimulated these strange attachments to buildings that were no longer there?

In any event, she did share some interesting information, namely:

If you like to read about urban development, then you might enjoy this book. Personally, I found it a bit tedious and could only give it 3 stars.