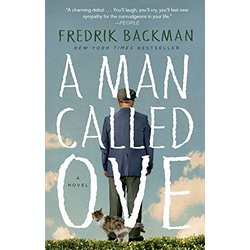 It evokes every emotion, laughter, anger, frustration and tears. The story may not grab you like a thriller, but the book is one you’ll tell all your friends about. It’s one you’ll think about and never want to forget. That’s what happened to me when I read A Man Called Ove by Fredrik Blackman.The story is about a crotchety curmudgeon named Ove. He lives somewhere in Sweden. At first you wonder why you want to read a book about such a grumpy old man. But, as you get into it, you learn more about Ove and how he became who he is.

The theme of the story is summed up in one line found later in the book but hinted at throughout: “For the greatest fear of death is always that it will pass us by. And leave us there alone.”

Nothing about this story is complicated or even unpredictable. It touches us in a real human way. I was reminded of Forrest Gump. He did amazing things in a very special way.

Ove isn’t as kind as Forrest Gump, but he is amazing in a special way #amreading

Ove lives in a subdivision in Sweden and he’s in constant battle with his neighbors. He cusses at the stray cat who wanders into his life. He fumes when people disobey the rules. The only thing that keeps Ove from going off the deep end is his wife Sonja. She’s also a very special person. In the book someone described the couple as black and white with Ove being the black and Sonja being the white.

There’s much you can learn from people and relationships in this story. It promises to delight. And, the author writes beautifully. Here are some examples I simply had to highlight:

“You only need one ray of light to chase all the shadows away.”

“And when she giggled she sounded the way Ove imagined champagne bubbles would have sounded if they were capable of laughter.”

“…the sulky boy’s face opened up in a smile. It was like a plaster cast cracking around a piece of jewelry, and when this happens it was as if something started singing inside Sonja.”

Don’t miss this wonderful Must Read.