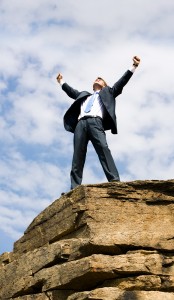 I had been writing on and off for years. I had several manuscripts tucked away inside my computer, never seeing the light of day. I trudged along in my job as a consultant/coach suggesting that people live their dreams. All the while, my dream stayed hiding under my own doubts.

On a get-away trip to Italy with a friend, we talked about our lives. We talked about everything, actually, but mostly we talked about what we really wanted to do. I’d been working at my career for over two decades and she as well. As we sipped wine and ate cheese, gazing over the Bay of Naples outside of Sorrento, we shared our deeply held desires. I told her about my writing and my desire to publish a novel. I had published business books that promoted my career, but what I really wanted to do was publish one of the sleeping manuscripts inside my computer. Her response was, “Just do it!”

That was day one of the 90-day journey. Once I got home I made a commitment to myself to dust off one of the manuscripts and spend time really focusing on it. When rejections came (and they always do), I would keep going. I wouldn’t let myself give up as I had in the past.

In the first week, I told all my coaching buddies that I was pulling away. I told them I was beginning a new journey. I’d see where it led. I stopped doing many of the things I had been doing in my work in order to free time for writing, editing, revising and preparing for publication.

The first month took me back to my favorite manuscript. This was a story I had written many years ago, and the one that always moved me to tears each time I read it. It was rich, deep. I re-read it and began the process of preparing it for publication.

Next, I sent it out to an online editor. I’d found her while searching among writer’s groups. I liked her comments of other manuscripts. I sent her mine with trepidation. She wrote back with some amazing observations. She asked if my target was Young Adult. When I answered no, she explained I needed to re-frame the book. She explained that I couldn’t tell an adult story from an adolescent’s point of view (even if the teen grows up.). At first I rebelled. How could I possibly reframe the entire 500+ manuscript?

By the second month, I was on a roll. I put down my rebellious self and completely re-wrote the book from the adult point of view. The story took off in ways I could have never predicted. I had it completely re-written in that second month with a new title. I was ready. Everything seemed to fall into place.

I wish I could report that by the third month, the end of the 90-day commitment, the book was published. But, nothing happens that fast in the publishing world. I can report that the polished manuscript, completely rewritten with new query letters and pitch lines, was ready in #First90 days.

As a result of this commitment to myself and #First90 days the story was in the hands of an editor and was then accepted and published by MuseItUp Publishing in November of 2014.

I knew when I signed that contract that if I had not focused my energy on my passion, I would have never achieved the success of #publishing a novel.

Here are some tips I learned in my #First90:

Take the plunge and just do it! Commitment to project with all your energy and passion brings success. Just do it!