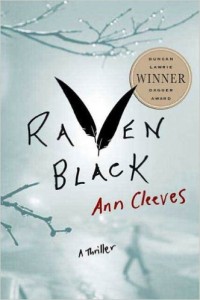 Isn’t it wonderful to find a new series that you really like? #amreading #mystery

I did that when I read the first book in the Shetland Island Quartet by Ann Cleeves. The story is well-done in many ways. It is told from several points of view with a chapter break delineating each. We get in the minds of many of the people around the Shetland Island. Cleeves doesn’t spend lots of time in each point of view, but enough for us to get a feel for the story and the people.

She introduces us to her protagonist detective, Jimmy Perez from the eyes of another character. What a cool thing to do! Later we get in his mind, and we become attached to the rumpled, self-conscious but highly empathetic detective. This is a story about a brutal murder of a young woman. As the story unfolds we learn of this murder’s links to a previous murder of a child. I don’t like it when children get murdered or threatened, but Cleeves does a nice job of protecting us. She doesn’t bring us too close to the previous murder victim. We learn more about the current victim. And, although I hated that she was killed, she wasn’t as vulnerable as a child.

Another thing that I appreciated was the description of the place. I’ve never been to the Shetland Islands in Scotland nor did I know much about the people.

This book will take you there. You will feel the bitter cold #amreading #mystery

You will understand the closed-knit relationship of the Islanders.

Furthermore I appreciated the beautiful writing. Here’s an example:

Sally felt if she reached out her hand she’d be able to touch the hole where once Catherine had been. It would feel hard and shiny like ice.

I actually solved the crimes, but that didn’t stop me from reading. My one complaint is that one resolution was a bit too contrived–perhaps to try and surprise the reader. She didn’t need to worry about surprises. The book was good enough without that.

If you’re looking for a new series (and I wish there were more than 4 because I’m about to finish the second one), pick up Raven Black.

PS. Just finished White Nights and I think it was EVEN BETTER than Raven Black. Much more plausible and the descriptions of the white nights in Shetland were amazing. I’m a new fan!

For a very different kind of mystery, try e-Murderer. Here’s the book trailer.