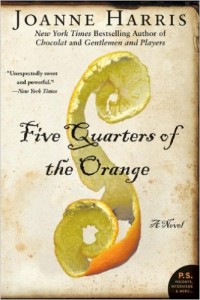 Joanne Harris, best known for Chocolat, writes about village life in France better than anyone #amreading

In Chocolat she created a magical place, full of interesting characters with all kinds of flaws. In Five Quarters of the Orange she does the same. But, this time, she adds quite a bit of mystery and intrigue.

The story is about secrets. Framboise returns to her home village after being gone (we later learned banished) for over forty years. She comes with an assumed name, but lives on her family farm, hoping to remain aloof and anonymous. The author takes us back to the summer when everything went badly for Framboise’s family, particularly her mother. At that time Framboise was a wild nine-year-old who loved to escape to the woods and fish. It was also during the time of the Nazi invasion. Framboise and her brother and sister befriend a Nazi soldier and that, of course, leads to trouble.

The story builds as the time moves forward. She provides enough hints throughout to make the ending predictable but still satisfying.

His moony, round face has darkened, grown pouchy and mournful. A limp mustache the color of chewed tobacco.

My breath stopped. I felt as if a flake of fire had blocked my windpipe and suddenly I was underwater, brown river clutching me under, fingers of flame reaching into my throat, my lungs…

Age had shrunk him; had softly sunk him into himself, like a failed soufflé.

…we had watched her with the wary caution of primitives at the feet of their god–and indeed, she was a kind of idol to us, a thing of arbitrary favors and punishments, and her smiles and frowns were the vane upon which our emotional weather turned.

Harris tells a story about love turned to hate about fear turned to violence and about the destruction of families due to war. She does it in a beautiful way that will keep the reader turning pages. This isn’t just another book about the tyranny of World War II. It’s much more than that.

Take a look at another book full of family secrets set in a more contemporary time.