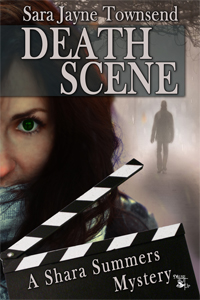 I had the pleasure of reading a delightful new mystery, Death Scene by Sara Jayne Townsend @sarajtownsend #museitup

Some of my blog readers will recall I interviewed Sara Jayne a few months ago. You can read that interview here.

If you like a comfortable mystery that will not cause your heart to palpate too much but will keep you entertained, this is a book for you.

The author did a nice job of creating a believable and yet, not a perfect character. She was believable because she was not sticking her nose where it shouldn’t be until she was really provoked. There were several instances when I thought, she needs to (I won’t say what, in order not to spoil things), but she did not. And, she did not because most of us would not. Unlike some cozy mysteries with amateur sleuths who take risks we’d never take in real life., Shara was much more realistic. Nonetheless when she realized what was going on, she didn’t waste time or mince words.

The story begins when Shara is called back to England (her birth home) from Canada to help her mother attend to her sister who was suffering from a mysterious illness. In England Shara realizes how much she misses not only her family but also England. She also realizes that she has little that is holding her in Canada. As the book progresses, Shara uncovers the truth behind her sister’s illness while she  learns more about what is important to her.

I felt the cold and wet English days. I also felt right at home with the love/hate relationship between the two sisters.

Looking for a  genuine character in real circumstances with a puzzle to unravel, read Death Scene @sarajtownsend #museitup

Fortunately for those of us looking for new writers and new series, the new Shara Summers mystery , Dead Cool, is available for pre-order.