Brown chronicles the story of the 9 American crew members and their quest for Olympic Gold during the Berlin Olympics. The story is true and quite riveting. 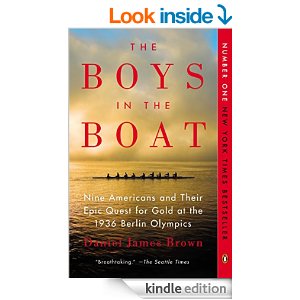 His descriptions of crew member Joe Kranz, of coach, Al Ulbrickson and of master shell maker, George Pocock held me spellbound. He sprinkled the story with many other characters but these were the main three. Brown also set the stage. The book began in the heart of the Great Depression. What was happening to people’s lives during that time played an important role in the unfolding of this story. What has happening simultaneously in Hitler’s Germany also had an impact. I loved the first sentence of this book:

“Monday, October 9, 1933, began as a gray day in Seattle. A gray day in a gray time” #amreading #novellines

We, authors, are told not to launch our books with the weather. I’m delighted that Brown ignored that advice. This sentence captured the essence of the story. Many gray days of grueling practice in unbelievable weather followed. The gray time between the worst depression in our history and World War II took a front row seat in this tale.

He described Pocock as a man who understood the sport of crew better than any man alive at the time. He not only understood the mechanics of it, he understood the psychology–what went on inside the boat. Here’s one of the many quotes I highlighted: “It is hard to make that boat go as fast as you want to. The enemy, of course, is resistance of the water, as you have to displace the amount of water equal to the weight of the men and equipment, but that very water is what supports you and that very enemy is your friend. So it is life: the very problems you must overcome also support you and make you stronger in overcoming them.”

The author interviewed Joe Kranz before his death. Those interviews and massive research as well as long discussions with Kranz’s daughter provided the sources for this book. Written with a sensitivity as well as a delight, Brown placed the reader inside the crew shell.

In addition, Brown contrasted the efforts of the crew with the pomp and circumstance and propaganda going on in Nazi Germany. He didn’t let the people who ignored what was happening in Germany off lightly, but he conceded that the world wanted to turn a blind eye on Hitler. The outcries to boycott the Olympics in 1936 went largely unheard. 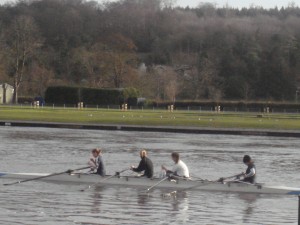 What did I know about oarsmen and the sport of crew before I read this book? Basically nothing. After reading Brown’s detailed descriptions, I’ve learned a lot and I have a new respect for the sport as both extremely competitive and athletic. It looks so graceful it fools us into believing it’s easy. Pocock described crew like a swan on the lake. Very graceful to the onlookers but working like hell under the water.

Although an historical account, this book does not bog down #amreading #review

As a reader, I wanted to know what happened next. Would Joe get on the varsity boat? Of course, we know he did, but how when everything seemed to be working against him. Would the crew succeed in their quest for the Olympic gold? Of course we know they did, but again, Brown made it so exciting, I began to doubt what I knew.

Indeed, this book will make a wonderful movie and I do hope that will be the next step.