Now, don’t get me wrong. I don’t go around killing real people, just imaginary people. The fun part is if you don’t like someone, zap, you can knock them off with the click of a button on your keyboard. I’ve noticed in my addictive viewing of British murder mysteries, that the good guy is sometimes killed. Or even the killer. That always surprises me. Particularly the latter. Those mysteries realize that even good people sometimes make bad decisions that either get them killed or corner them to the point of killing. 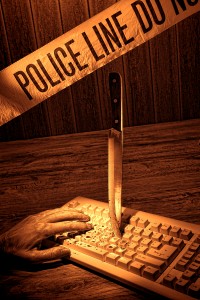 Recently I spent some time in Bologna, Italy. A very nice city, full of beautiful porticos. It’s a great walking and cycling city. There is lots of activity in Bologna. People everywhere at all hours. My naughty mind began playing out scenarios of people stabbing one another in the various corners of the bars or better still in the dark corridors of the old, medieval apartment buildings.

Sometimes it’s not the place where my imagination conjures up murder, but the circumstances #amwriting

A dinner party goes wrong or friends having a falling out over spouses or neighbors in a war over a joint driveway or a fallen tree. Most of the time, these little incidents end in disrupted friendships or divorces. But, in my mind, things may go in a different direction.

Was I always like this? Honestly the answer is no.

Before I began writing mysteries, I never thought about murder #amwriting

I read a lot of murder mysteries, but did I see murder in my own world? The answer is no. Now, however, being a writer, I see everything differently. I’m much more aware of people and their motivations. I wonder what they are thinking and why they do what they do. Check out this previous blog post.

That means that writing has broadened my view of the world. Instead of simply existing in my own reality, I now make up stories about other people, create new realities and, yes, see murder everywhere.

What about you? Do you see murder everywhere? #amwriting

If you’re a thriller writer, do you see spies around every dark corner?

Love a juicy murder? Check out this new release, Murder on Moonshine Hill.