When we write a book, a fully grown person pops up. They have a history and a life that we know nothing about. Who are these people? What is their history and what in the world do we call them? Naming newborns is hard enough. Some parents spend months trying to come up with the perfect name. And these little people have no history yet. 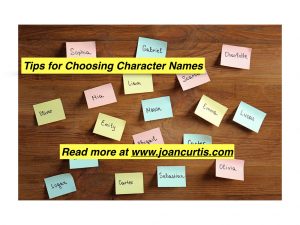 People with history have characteristics that help name them. For example, if you have a character from a Latin American Country, you would want to name him Boris. That might be an easy and extreme example. But, how about a strong protagonist who tends to be hard-headed. Would you name her Celeste? Or Megan? If you have an extremely beautiful character, you might name her Kimberly rather than Jane.

I’ve learned that characters tend to name themselves as I go through the development of the story. Sometimes that means I have to change the name. That is hard because I’ve often gotten attached to that name. I recall years ago my husband and I had a friend whose name was Jack. I met him as Jack and he went through the first sixty years of his life as Jack. But, his actual name was Roland. At age 60 he asked all his friends to call him Roland. He demanded we do so. It took me a long time to accustom myself to Roland, but I finally did. Some of his friends never could and still referred to him as Jack.

Last names are equally hard. A last name connotes a heritage. My main character in the mystery series is Jenna Scali. I named her Scali because her dad was Italian. Quentin Pearson, her trusty side-kick, was named Pearson because he’s from the UK. The name Quentin took me many renditions. I wanted a particularly British name but one that was a little unusual. When I lit on Quentin, it seemed perfect for his character. He’s a bit quirky.

Here are a few things I’ve learned about naming characters:

Those are a few of my thoughts about naming characters. What are yours? #amwriting

How do you like my characters’ names, Jenna, Quentin, Marlene, Starr, Ralph? Thoughts?

What are your favorite character names? #amreading

Check out my characters in this book trailer for e-Murderer.