I knew going into EL Doctorow’s book Homer & Langley: A Novel that the ending would be sad. Anyone reading it knows that the story is a fictional telling of the lives of two brothers who were found dead in their New York City apartment.

The brothers were major hoarders. It took weeks to dig them out of the apartment #bookreview

What a horrible event! EL Doctorow fictionalized that event to help us understand what their lives must’ve been like. He used his ability as a masterful writer to create a world around these characters. After I finished the book, I looked up the true story about Homer and Langely. I found some variations in Doctorow’s telling, but not anything major. The author tried to reconstruct what it must have felt like to live in the early part of the 20th Century in New York City and to suffer from the effects of WorldWar I. 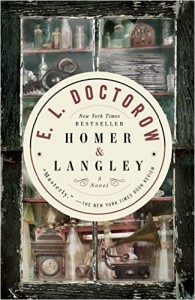 Doctorow told the story from Homer’s point of view. We see the world from his eyes and the ironic thing is he goes blind. As a blind man, totally dependent on his older brother, we begin to understand how this man ended up alone and dead in his apartment. The character that Doctorow developed was warm, sensitive and intelligent. As a young man, he enjoyed going to the speakeasies with his brother and dancing, drinking and partying. He enjoyed going to the movies with one of his caretakers who was also his music student (with whom he loved all his life) He played beautiful music on his piano. He never brought items into the home to add to the hoarded collection, but he knew his brother was piling up many things. He recognized that his brother wasn’t well mentally but that didn’t matter.

Homer and Langley lost their parents in a tragic accident. They were left to manage on their own. Langley went fight in World War I and was zapped with gas. Part of his disability was the effects of that experience. Langley was very paranoid and this paranoia grew as he aged. Doctorow nailed that part of his personality. Newspaper accounts of his fights with the various utility companies and other government agencies helped the author shape the character’s neurosis.

Even though I knew the book would end badly, the author handled it masterfully #bookreview #amreading

The crisis of their lives escalated with time drawing closer and closer to the end, but always told from Homer’s point of view. The bond between the two brothers was unbroken. They lived and died together.

This book is a great read. It helps all of us understand the nature of hoarding #amreading #bookreview

Right after I finished Homer and Langely, I began frantically cleaning out my closets. If not anything else, it had that kind of impact.

When we lost EL Doctorow this year, we lost a writer who knows how to craft a story around real events. He did this beautifully in this book.

Here are some lines I thought particularly beautiful:

Her goodness was like the fragrance of pure uncounted soap.

…cemetery trailing a body in a coffin–an impatience with the dead, a longing to be back home where one could get on with the illusion that not death but daily life is the permanent condition.

On soft gentle fantasies do men like me survive.

And so do people pass out of one’s life and all you can remember of them is their humanity, a poor fitful thing of no dominion, like your own.

Why not write the, she says. There is music in words, and it can be heard you know by thinking.