My publisher’s cover artist once again outdid herself. The cover for e-Murderer is now out! Taking what she knew about this new mystery series and turning it into intriguing art, the artist produced a wow wonderful cover.

Here’s a blurb about the e-Murderer. You can read a sample of the book by signing up. Find out if this new series is for you. The e-Murderer coming in September to be released by MuseItUp Publishing.

This new cozy mystery series with a young female sleuth promises to keep you glued to your seat until the last page. 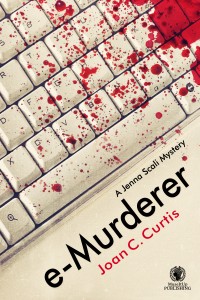