0
0
0
0
0
If you haven’t read the e-Murderer, maybe you’d like to meet Jenna and Quentin #amreading

In this story, they embark on a camping trip.

Trying to dissuade Quentin from doing anything was like trying to change myself into a frog. “Why won’t Alan go with you?”

He harrumphed. “Alan doesn’t like to get his feet wet. He’s fussier than your big ol’ white cat.”

“Churchill goes out in the rain—well, not that he likes it, but he does.” I took a deep breath. “Okay, I’ll go, but what do I need to take?”

“Bravo!” He nearly danced out my door. “Pack your sleeping bag and a bottle of insect repellant. I’ll fetch the rest.”

“Insect repellant,” I grumbled to myself as I moved back inside the house. What in the world had I gotten myself into? Being Quentin’s BFF had its drawbacks.

Saturday morning rolled around before I had a chance to back out. Quentin pulled up to my driveway and hopped out of his car like a boy on an adventure.

“This is going to be such a lark,” he said as he settled his long, lanky body in my small Honda for the ride to Cumberland Island. “I’ve been reading about this place forever. It’s absolutely natural. A beach with no hotels and tacky restaurants. Can you imagine it? Pristine. Like the beaches in Cornwall.”

“The beaches in Cornwall are not populated because it’s cold and wet there.”

“Yeah, it’ll be hot as hell without air conditioning.”

Yeah like I love freezing on a snowy mountain in ski boots that pinch my feet, another of Quentin’s bright ideas.

“Hey, listen to what the website says. ‘Cumberland Island, Where Nature and History Meet. St Mary’s is the gateway to Georgia’s largest and southernmost barrier island.

He exhaled as if allowing his imagination to soak up the place.

“It sounds wonderful,” I acquiesced. I’d heard of this wilderness paradise ever since I’d moved to Georgia. What attracted me was not the wilderness so much as the horses that lived in the wild there. But, what had me a little nervous was what other kinds of wild critters might lurk in the underbrush.

We reached St. Mary’s, a small Georgia coastal town with clapboard houses and fishing boats, a perfect setting for an Agatha Christie mystery. My GPS took us to the dock where we were to meet the ferry to go over to Cumberland Island, the only way to get to that barrier wilderness surrounded by water.

Quentin placed his red Georgia Bulldog cap on his head and leapt from the car. “Hurry up, Jenna. We don’t want to miss the ferry.” He seized the two duffels and the sleeping bags from the backseat. I grabbed my purse full of sunscreen and perfume. Okay, I never wear perfume, but who knew when I’d be able to take a bath in this wasteland.

We joined a group people on the dock.

“They said the snakes are as large as trains over here,” a blond girl told her companion. She wore a low-cut tee and shorts that hugged her rather meaty thighs.

I tossed Quentin a look and mouthed, “Snakes?” 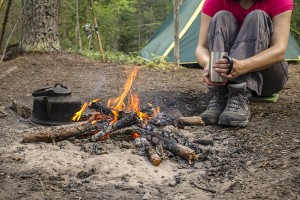 Oh my God. Wonder what else he forgot to tell me!

“I’d be more fearful of the shooter,” the man, standing next to the girl responded through his snaggletooth. Apparently his parents didn’t believe in orthodontics.

Shooter? Did he say shooter or scooter? Geez.

The girl snuggled close to the snaggletoothed man. “You think he’s here?” Her voice shook.

“C’mon, Stace, he won’t be on the Island. He’s probably done escaped to Cuba by now.”

“Sorry to intrude, but did you say shooter?” I asked.

“Yep. Y’all must be just now getting here?”

“Right-o. Five minutes ago from Athens,” Quentin popped in.

Both stared at Quentin as if he’d dropped from the sky.

“Are you a gen-u-ine Brit?” the girl asked. She moved a bit closer to Quentin and looked him up and down. Apparently snaggletooth wasn’t as interesting.

“That I am, straight off the boat from Manchester. Tell us about this shooter, won’t you?”

The man wrapped his arm around the girl to protect her from Quentin who didn’t have the least interest in the fairer sex. “Some lowlife shot a girl and her kid coupla nights ago. Lest ways that’s what the people in these parts are saying. He up and ran and the po-lice are still looking for ‘im. I was just joshing little Stacy here ‘bout him a being on the Island.”

The ferry pulled up. The people unloading looked as if they’d endured an episode of The Survivor, dirty, droopy-eyed, not a smile among them. They peeled off in twos or threes, dragging their dirty bags behind them.

Quentin moved from foot to foot, clearly anxious to get onboard.

“My name’s Billy Joe,” snaggletooth said. He held out a big hand to Quentin who took it with a quick shake and then wiped it on his jeans.

“Pleased to meet y’all,” Stacy said. “This y’all’s the first time to Cumberland too?”

“That it is.” Quentin said with a quick glance to make sure I was following along and had not escaped. He handed me one sleeping bag.

We’d made our way starboard, away from Billy Joe and Stacy who climbed to the top. The breeze nearly swiped Quentin’s hat off his head, but he grabbed it in the nick of time.

The island appeared over the horizon looking like something out of South Pacific. The sand almost white with nothing to mar the expansive shoreline. Not a soul in sight.

When the driver docked, he pointed us in the direction of the campgrounds. Most of the people onboard went that way. A few stayed on the boat, apparently going to the small inn somewhere on the other side.

Quentin tugged my arm. “Let’s get our feet wet before we head to the camp.”

I followed him. The sun penetrated my hair causing my scalp to tingle. Where was my hat? Probably tucked in the bag with the insect repellent. Pieces of driftwood littered the sand. But, unlike other beaches, there were no signs of civilization—like empty beer cans or even pieces of shells.

A figure moved way down the beach.

Quentin had moved closer to the shore. “What, love?”

I headed in the direction of the shadow. “There, just beyond those dunes. I saw someone.”

I reached the place where I’d seen the movement. Nothing. Birds chirped from the trees and several mosquitoes made a meal out of my bare arms and legs. I slapped them away.

“Did you see a wild horse?” Quentin asked. Hoof marks covered the sand.

“I saw a man on a horse.” I followed the hoof marks toward the dunes.

Quentin panted behind me. “Probably a ranger, patrolling the area.”

“What ranger? I didn’t hear anything about rangers and anyway why would he disappear like that?” I continued to trace the horse’s path.

“Jen, we don’t want to get too far from the camp.” He pulled on the back of my shirt. 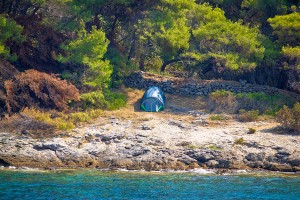 The beach was covered in low-lying trees, thick with green growth. A man on a horse could easily disappear among the underbrush.

“C’mon. We need to get ourselves settled at the site before all the good spots get taken,” Quentin said.

Reluctantly, I followed him back.

That night as I shivered around a ridiculous fire that barely kept a blaze, Billy Joe told Quentin all about his camping exploits. Bored, I wandered toward the latrines. Yes, latrines. Basically they were holes in the ground where we were expected to remove our panties and pee. Yuck. Maybe if I ate and drank nothing, I’d never have to use those facilities.

I walked back behind the trees that blocked off the camp and gazed at the moon on the water.

Someone grabbed me by the arm and knocked me down. “What—“ I yelped.

A deep voice said, “You saw me today, you nosey bitch…” Eyes glared from the darkness out of a hairy face. Had I been caught by Godzilla with an southern accent?

I caught sight of the gleam of a gun when the man grimaced, released my arm, and fell like a tree on my leg.

Billy Joe stood over him with a large club in his hand. “You okay?” he asked, helping me to my feet.

I brushed off my backside. “I think so. What or who was that?”

Billy Joe lifted the gun Godzilla had been holding and handcuffed him. “My guess he’s our shooter.”

He grinned, giving me a good look at his snaggletooth in the moonlight. “Stace and I are here undercover. We suspected this here fella was hiding on the island. So, we came a looking. Surenuf, you found him for us. Good job! Don’t know how you snuffed him out. My guess is he’d been deep in the bush on the island.”

“Well, I didn’t exactly mean to. But, so glad I could help.”

Quentin came running in our direction. “What the devil…” he said, seeing the shackled man on the ground.

“Your girl helped us nab this fugitive. Good thing I was here otherwise he might’ve blown her head off, too.”

Quentin gasped and scowled at me. “My lord. I can’t take you anywhere without you getting into some muddle.”

Billy Joe moved toward the shore and peered out. “The ferry is on the way back to take our prisoner. Stace and I will be off with him. Good to meet y’all.”

The goon moaned when Billy Joe turned him over.

“I’m not gonna miss that ferry,” I told Quentin on my way back to the site to gather my stuff. “I’ve had enough of this camping thing. I’m heading home to my cats and my warm bed.”

We found a cool little B&B in the town for the night. I settled into a warm bubbly bath and sighed. Now that’s my idea of camping.

If you enjoyed this introduction to Jenna and Quentin, you might enjoy the e-Murderer. Here’s a sneak preview.