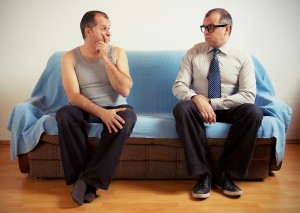 I recently saw the movie The Lady in the Van with Maggie Smith. This is the story about a homeless woman who parks her van in Alan Bennett’s driveway for fifteen years. It is a true story. One aspect of the movie I found interesting was Mr. Bennett’s writing style. He played two roles: his writer self and his living self. The movie depicted those two personalities often at odds with each other.

It made me wonder, how many of my writer buddies are split-personality writers #amwriting

As for me, the worlds and characters I create stay in my head all the time. Whether I’m writing or whether I’m grocery shopping or whether I’m feeding my cats. They are with me while I’m creating a story. They never leave me. Rather than splitting out into another person, we all become one big happy family.

My characters talk to me and I to them #amwriting

They suggest ideas for the plot and they move the story along in ways they deem appropriate. I do not talk to myself as a separate, living person, different from my writing person.

I’m sure there are writers who do separate themselves from their characters and their writing personae. These writers would mimic the style of Alan Bennett in the movie. The writer in him accuses the living man, “You are good to her only because you want me to write about her.” That comment suggests a bit of guilt on the part of the writer. He saw in himself more than simply a kind man helping a homeless woman. He saw other motives for being kind to Mary Shepherd (The lady in the van). And he didn’t care of those motives. The separate writer self was his way of dealing with these mixed emotions.

Perhaps if I wrote things that disturbed me, I might need to separate myself as Bennett did. Perhaps…

What about you? Are you a split-personality writer?

If you enjoyed this post, you might enjoy the movie. Here’s the official Trailer for The Lady in the Van.