If we want people to come up with new ideas or create exciting stories for books and films, we must allow them time to rest and sleep as well as work. Perhaps we’ve always known this truth. Often people ask writers about their writing day. How many hours a day do you write? That’s what they are really interested in. A surge of guilt runs through us when we realize our writing time might not be the prescribed eight hours a day. In fact, many of us write four hours or less. 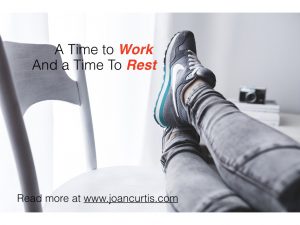 Recently I read an article (the Week Magazine 5/12/17 A Better Way to Work) where researchers have discovered that people indeed perform better when they spread their work out and take frequent breaks. The article discussed how many of history’s most creative people rested versus labored. Charles Darwin, for example, began work at 8am for about an hour and a half. At 9:30 he would read the mail and write letters (our equivalent to answering emails) He resumed work for another hour until he ate lunch. After lunch, he’d answer more mail and then work another hour before taking a nap and later taking a long walk. He worked after the walk until dinner at 5:30. Notice all the breaks and the hour to hour and a half stints of work. This schedule enabled him to write 19 books.

As for me, my writing schedule varies from day to day. But, when I am in the middle of a work-in-progress, I usually spend about two hours writing after I’ve done some form of exercise. Later in the day, I do social media or write blog posts. That two-hour period of writing must be uninterrupted. Sometimes I work longer, depending on my mood and how the project is going. When I’m editing a work, I do more work in the afternoon. Clearly, I take a lot of down time when my mind can roam about. That’s often where I get my best ideas. I can imagine Darwin on his long walk, observing creatures and coming up new theories that he later expanded into a book.

So, no more guilt for the time you spend, walking, exercising, making lists, answering mail, or resting. All these activities will prepare you for your deliberate practice of writing.

What about you? How do you spend your writing day? Are you getting enough rest? #amwriting