How did I know? Word of mouth from some of my most trusted readers, including my mom. Finally I picked it up and devoured it in less than three days. I would have read it faster, but the galleys for my new book came with a deadline attached, and I had to divert my attention. 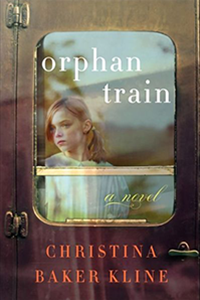 This book is heart breaking.

I sure didn’t. Apparently in the early part of the last century, orphan children, often from immigrant families, were shipped off to the mid-West in search of “homes.” Instead of homes, however, they found themselves in indentured servitude. Many of these children experienced extreme tragedy before they ended up on the Orphan Train. The cruelty and insensitivity of those who initiated this program and those who took in children is beyond belief.

Given that horrid piece of history, the author takes us on a fascinating journey @bakerkline

She contrasts the life of one throw-away child on the Orphan Train with a modern-day foster child. The connections between these two very different, but very similar souls will warm your heart.

Orphan Train is full of history as well as emotion @bakerkline

Several scenes contain vivid descriptions I found very difficult to read. I was grateful to be able to skim.If this book is every made into a movie (and maybe it will be), I will have to shut my eyes at times.

Have you read Orphan Train? What are your thoughts?