JoJo Moyes created a haunting story with characters that resonate.  Had I realized what the story was about before I read it, I may not have embarked on the journey. I’m glad I did not know because it was a journey worth taking. I would say to you don’t be troubled by the uncomfortable theme. Instead allow this very gifted author to take you on a fictional adventure that will make you laugh and cry. Full of emotion and soul searching, this book captures so much. I was delighted  to recently learn that she has written a sequel that will be released this fall.

I liked her instantly because she was happy in her menial job working in a cafe. She loved everything about the cafe, the smells, sounds, people. She looked forward to going to work every day. What a delight! Unfortunately her boss decided to close the cafe and she lost her job.

Set in a tourist village in Northern England, the story shows how few options Lou has for work and how desperate her family is for her little bit of income. Her brilliant sister got pregnant and has a small child who lives with the family. Her demented grandfather lives with the family. The mother spends her time looking after the grandfather and the child. Her father has a job in the only industry in the town and it is being threatened. Lou has to find another job. The author makes her desperation clear. 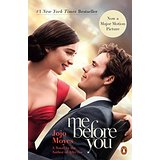 She finally agrees to become the caretaker of a quadriplegic man. This is a man who was young, vital, successful and very rich. He was struck down in his prime and left without use of most of his body. His condition is extremely bad. Lou dreads this job as most of us might. She’s not to be responsible for the man’s “personal” needs. There’s a trained nurse for that. She’s responsible for “keeping him company” and cheering him up. How could anyone cheer up a person in such dire straights? Lou goes into the job fearful and intimidated.

It wasn’t long before her winning personality begins rubbing off on others. Her vulnerability attracts her to others. The man she’s caring for is sarcastic and angry. But he recognizes in Lou a genuine sweetness and naivety that gives him a reason for breathing. He begins teaching her about the world beyond that small village.

Trauma that kept her in the village and in her narrow world. She stayed where it was safe. With a boyfriend who was all wrong for her but who was safe.

This book is beautifully written. My only negative comment is I’m not clear why the author went out of Lou’s point of view. On three occasions she veered to three different points of view. I didn’t see that seeing the situation from those vantage points actually helped expand the reader’s knowledge. Thankfully Moyes didn’t keep us in those points of view very long.

This book is one I wish I could write #mebeforeyou @jojomoyes

It’s more than a love story. It’s a story about trauma, humanity and life. It’s a story that makes us all ask difficult questions.

It’s a masterpiece. It ‘s a story that I keep thinking about and will for the rest of my life #mebeforeyou @jojomoyes