Many authors do not realize they’ve been redundant #amwriting 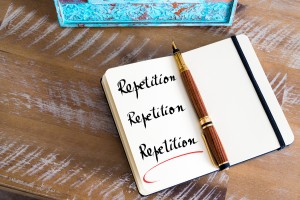 day. That’s about 2 pages. But, a reader might read three chapters in a day. That reader will pick up on more redundancies than I will as the writer. So, how can we go about eliminating the redundancy in our writing to make sure our readers don’t scream at us in frustration!

Tip # 1: Do not underestimate your readers #tips #amwriting

As writers sometimes we believe our readers won’t remember things. We think we must tell them over and over. Not true! They have memories like elephants. Many a reader will correct us when we make a mistake. Once you tell the reader what someone looks like, a mental image forms in their minds. There’s no need to tell them again and again.

Tip #2: I’ve said it once and I’ll say it again (not to be accused of being redundant)

That helps me more than anything else to catch redundancies. Suddenly I’ll realize, I said the same thing several pages back. Reading it to myself doesn’t have the same impact.

Tip #3: Ask someone else to read your work #tips #amwriting

Even in the early stages of a draft, a set of new eyes on your work can pick up redundancies. If the new reader says, “I didn’t know he had long eyelashes,” well… you’ll need to say it again.

Tip #4: Watch out for over emphasizing events #tips #amwriting

Not only do we make errors in redundancy when we describe our characters, but often we do so when we describe the major events. For example in my newest manuscript, there’s something hidden under the frame of a painting. My characters are all talking about this. Do I really need them all talking about this hidden item? Maybe not. I plan to go through the manuscript to make sure I haven’t driven my readers crazy.

Sometimes we get so hung up on what we have written, that we can’t bring ourselves to hit delete. Believe me. Your editor will hit that button with relish. I’ve often deleted something I really wanted to keep, just to see how it might sound when gone. Geez. It sounds so much better.

Don’t drive your readers to distraction with redundancy. Try these 5 #tips #amwriting

What tips do you have to keep readers from tossing your book across the room?