0
0
0
0
0
If you enjoy historical memoir, you’ll love the Hare with the Amber Eyes #amreading 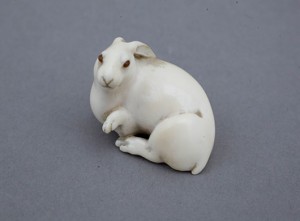 Wall’s Hare with the Amber Eyes

The author traces the home of his family’s collection of 264 netsuke (BTW, I Googled them so I could visualize them) from the hands of his uncle in the 1870’s (Uncle Charles) to his own hands in the 21st Century. But, the story goes way beyond the “lives” of the Japanese figurines. The author tells us about the people who owned them. We learn that his Uncle Charles was a great art collector. He not only acquired the netsuke but many other pieces of art–including the works of Renoir, Manet, Degas and many more. He was also a friend of Proust. There’s a wonderful photo in the text, painted by Degas which shows his uncle in the background.

This is a story about a great Jewish family, Ephrussi, who migrated from Odessa Russia where they made their first fortune in grain shipping, to France and on to Vienna. They became amazingly rich as bankers and financiers.

It is a story about loss. Tragedy drips from every page as the time period nears World War II and Vienna. Loss begins during World War I. The author shares insights and records from his great-great grandparents, his grandmother, his great uncle and his father. All pertinent to the life of the netsuke.

As a reader I was spellbound #amreading

Fearful not just for the people but for the netsuke. As a reader I learned so much. For example, how compulsively Japanese art was collected in the 1870’s and forgotten or abandoned by the 1890’s. How persecution of the Jews ran rampart not just in Nazi Germany but throughout the 1800’s as well as throughout cities like Paris and Vienna. How the people hated the Jews for their success. I learned much about hatred, about loyalty, about love and about art.

This book goes from Paris in the 1870’s to Japan in the 1940’s. With Vienna during World Wars I and II in between. There’s a slight diversion to Odessa to finish the cycle of the family’s history.

The writing is beautiful. If you were like me, you’ll feel the tension, distress, and fear when the Nazi’s enter Vienna. Yes, we all know they’re coming, but he writes in a way the builds the tension. Would the family get out? Will the netsuke survive the theft and plundering of the art throughout the city?

This book won several awards and deservedly so.