That’s what happened with The Boston Girl by Anita Diamant. If you happened to read her other bestseller, The Red Tent, you’ll see this book is very different. 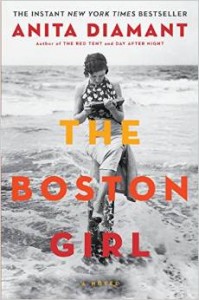 First, it is set in our time, not in Biblical times. Second, it is told from the point-of-view of a grandmother telling her granddaughter about her life. The book explains not just the life of Addie Baum but also her life from the standpoint of Jewish Russian immigrants. Addie defies much of the rules of womanhood at the time. She goes to work and writes for a newspaper (but she can’t publish under her name.) The book begins when she’s a pre-teen and works its way through to her current telling age of 85. For most of the story she’s showing us what it was like to grow up and become an adult in the 1920’s and 1930’s in Boston. She described the “ghetto” where her family lived and the trauma of the 1918 influenza epidemic to her listening granddaughter and to us the readers.

Addie, not being one of them. She could never satisfy the demands of her mother, even when she brought home a nice Jewish boy to marry. The mother also made life difficult for Addie’s father. The grown-up Addie talked about her mother openly with her granddaughter and shared her feelings of insecurity and sadness. The story will sweep you away and you’ll forget that the grandmother is talking until she says something to remind the reader that her granddaughter is present.

After reading this book, my own mother told me things about her life that she’d never shared #amreading

The sun was so bright on the water it was like staring at a million tiny mirrors.

…the words hung in the air like a bad smell.

When they started fighting, Celia shriveled up like a plant without enough water.

I thought I must look like a weed in a rose garden.

I felt like I was standing on a pond that wasn’t frozen all the way through and if anyone asked me, “How’s the family?” the ice would break.

This book will make you laugh at times and cry at times.

If you liked this review,

Come to a Twitter Chat to talk about reading and writing 4/14 at 9pm EDT. #scribechat