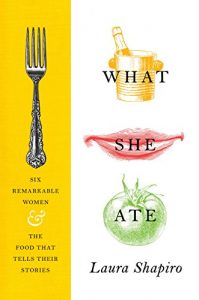 What She Ate: Six Remarkable Women. The Food Tells Their Stories by Laura Sapiro is a biographical account of six woman and what they did or did not eat. The author contends that most biography is more interested in what a woman does in the bedroom versus what she does in the kitchen. Yet, most women spend many more hours in the kitchen.

Starting with Dorothy Wordsworth (the sister of William Wordsworth), we encounter an 18th Century spartan life. She began by obsessively looking after her brother, making sure he had everything he needed–food and clothing. Once he married, her life changed. Although her collapse didn’t happen right away, it occurred tragically in her latter years. She became obsessive with food and practically ate herself to death. You must read it to understand.

From her we travel to late 19th Century and early 20th Century London where we encounter an unlikely woman chef. Rosa Lewis becomes renowned for her cooking when she wins the attention of King Edward. In this section we learn more about what Rosa serves than what she eats. Nonetheless, understanding what foods were considered proper, elegant, special at this time was quite interesting.

AfterRosa and her colorful relationship with food, we move to a more dull, drab foodie in Eleanor Roosevelt. It doesn’t take much study to learn that Eleanor couldn’t care less about what she put in her mouth or what she served while in the White House. Sapiro shares a little  secret we probably didn’t realize. Once Eleanor left the White House (or Franklin was dead), she rebelled big time. Food became something to relish and enjoy. She no longer partook in the dull meals described in her early years. Part of her reticence toward food in the 1930’s was due to the Depression. She couldn’t indulge when others were suffering. Later, she no longer had that restraint.

We follow Eleanor to Eva Braun. Here we learn of a very ego-centric woman who may have had an eating disorder. The author never suggests that she ‘purged’ or starved herself. But she makes it clear that Braun was overly concerned with her appearance and never finished the food on her plate (nonetheless she drank plenty of Champagne). In this section the reader learns as much about Hitler’s eating preferences as those of his mistress.

My favorite character of all comes next, Barbara Pym. Some of readers may never have heard of her. She’s a mid- 20th Century English novelist. Actually a satirist. And, she was one of my mom’s favorite writers. Her acclaim may have been downplayed because she writes of small village life with clergy and ladies of the parish. But she shares a slice of that world that’s both delightful and memorable. Again, we don’t learn as much about what Pym, herself, ate as we learn what her characters ate and how she handled food and meals in her books.

The final incredible woman is Helen Gurley Brown, the renowned editor of “Cosmopolitan.” The author talks about Brown’s love/hate relationship with food. She, like Braun, was so concerned about her figure to the point that almost appeared anorexic. Scanning the pictures of her in her late years, I noted she was extremely thin. Apparently she was proud of that slender build and bragged about her thinness her entire long life (She lived to 90!) She took great care in what she cooked for her husband, but she often did not eat the same food.

The author ends with a “memoir” of her own relationship with food. It’s quite interesting and perhaps worthy of being a description of the seventh incredible woman and what she ate.

This book deserves 5 stars even if we still don’t know a lot about what several of the woman ate. Nonetheless, the approach was both novel and interesting.