I’m reading a mystery, Jo Nesbo’s The Son, with a bad good guy. I find myself cheering for him when he kills worse bad guys. But, he tends to kill them in the same way they’ve killed others, which isn’t pretty.

It started me thinking about what creates suspense #amreading #amwriting

Usually we are cheering for the hero. We want them to get to whatever goal they have in the story–whether it’s to get the girl or boy or to find the killer or to escape alive. Nesbo created a wonderful bad guy who brought back memories of TV series Breaking Bad. Most viewers recognized our two heroes, Walter White and Jesse, as very bad. But, if you were like me, I didn’t want them to get caught. The tension in the series was to see if our heroes/villains would escape the law. The same is true in Nesbo’s book. But Nesbo also turns the table in another way. The good guys–the top police–are very bad. So the bad guy is the good guy and the good guy is the bad guy.

Do I have you totally confused?

What creates suspense? Here are some tips I learned as I read The Son. 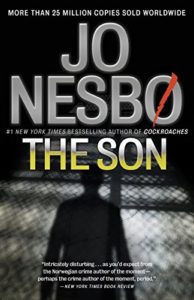 You can believe the motives even if you wouldn’t use the same methods. If the character is too good or too bad, he/she becomes boring and predictable.

Put your character up against even worse bad guys #amwriting

When he’s up against the minor bad guys, the reader knows he’ll be okay. If the reader has to worry about him at every turn, the tension is lessened when it really matters. It reminds me of when Zubin Mehta, the famous conductor, talked about Ravel’s Bolero. He said, “The same bars are played throughout the piece, over and over. But, the orchestra must hold some back so that when it erupts in the end, it is magnificent.”

Most readers don’t mind being in the mind of a bad guy–even a good bad guy–so long as it’s temporary. Furthermore, you need to show the really bad guys who are scheming against your character. If your guy knows what they’re doing, the suspense lessens. Alternating or various third person views create that kind of tension. But, by all means, don’t try and write in the omnipresent!

These are the ideas about creating tension and a good read when the good guy is really bad. What suggestions do you have?

What books have you read where the bad guy is good? #amreading

PS. I just thought of another good bad guy book: The Girl with the Dragon Tattoo… Agree?